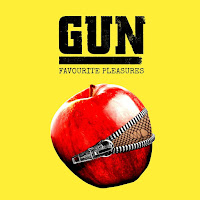 In the first week of 1969 a song by a band called Gun entered the Dutch charts. 'Race With The Devil' impressed me no little at the time. Now I would call it a gimmick hit. That Gun was never heard from again, although I found the single second hand somewhere in the past decades. The second Gun scored a hit in the 90s with a cover of Cameo's 'Word Up', a disco song from the 80s that I sort of liked. Never to be heard from again, by me. Gun nor Cameo.

Fast forward to 2017. An album lands on my digital doorstep by a band called GUN. So what Gun is this? Not the one of the Gurvitz brothers, but the band from Glasgow that is making records since 1989. After an hiatus of nearly a decade the band is back in business since 2008, all of which I was totally oblivious of until recently.

Straight away there is some strong riffing going on from the get go. GUN speeds head first into a song into which there is a Led Zeppelin element in the roughness of the riff and the attack of the song, combined with a great sing-a-long chorus. Together 'She Knows' adds up to a grunge meets Britpop at lunch with U.S. powerpop, spiced with a little punky stuff. In short 'She Knows' is totally irresistible.

In this and the rest of Favourite Pleasures the band totally delivers on its own word: "GUN will always have tons of melody - over the years that's been instilled in us". There is not a gram of originality on Favourite Pleasures. From the singing style of Steven Tyler to every pop rock sound of the past decades, they are present on this album. You will find references to so many well-known pieces of music, that it could have been a music quiz. This could have made this album one big cliché. It isn't for a very good reason. What makes it such a pleasure to listen to is the enthusiasm with which it all is presented and the sheer power of the songs. The first and the last criteria for the songs seem to be free flowing melodies and harmonies that are flawless in composition and arrangement. The kind of songs that always seem to have been there and always will be. Tons of melodies indeed.

In the end the name Aerosmith keeps popping up. There is one huge difference though. Where Aerosmith has come up with perhaps 9 truly great songs on all its albums, GUN comes close to that number with just one album. With the exception of the totally unnecessary ballad at the end called 'Boy Who Fooled The World', there isn't a weak brother on this album. There is a little something for all rock fans, save the lovers of the metal side and louder. That could also be a let down for some, not for me. I sit here moving my head and smiling a lot, while writing this review.

There's no need for more words here. This album is a ton, minus one ballad, of fun. With an extra mention for 'Black Heart'.

You can listen to 'Favourite Pleasure' here:


And that other Gun? Alright, you find 'Race With The Devil' here: