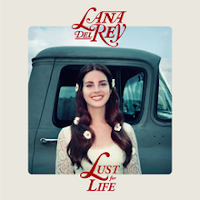 Another of the bigger releases during my holidays was Lust For Life. Readers of this blog have noticed that I have a weakness for the voice and music of Lana del Rey. That she has a gracious appearance is a nice addition, but when I listen to her music, there are no pictures involved. With her albums 'Honeymoon' (2015) but especially 'Ultraviolence' (2014) she entered my musical universe. Although, that happened before that with the song 'Ride', that impressed me a lot. The sensual atmosphere is more than a gimmick. Lana del Rey creates a universe of her own, that incorporates the world of Doris Day movies as much as modern R&B. The mix that (the team around) Lana del Rey conjures up is sort of irresistible.

Now there is Lust For Life, Del Rey's third album since breakthrough album 'Born To Die' (2012). The title has nothing to with Iggy Pop's same titled punk album and hit of 1977. Not even in atmosphere or intent. This Lust For Life is enjoyed from a lounge chair with all the time of the world to enjoy this moment. Luxurious food and exotic cocktails within reach.

On Lust For Life Lana del Rey is more aligned to modern dance and R&B than before. In a Lorde sort of way. Cooperation with singers and rappers are a part of this latest album. I notice The Weeknd, but also names that have no meaning for me. A famous name is Stevie Nicks, which is a logical choice. Vocally the ladies certainly are related. Another guest role is filled in by Sean Ono Lennon, who has found his own role in music, by mainly staying in the background. A whole host of co-producers are on the list, with Lana del Rey and Rick Nowels present in all songs. Nowels has a list of productions longer than I can post here. The list of people that are credited for songwriting, the record is 7, producing, a record of 5, and playing instruments is almost like reading the phonebook. How many people are needed to make an album these days?

In the cover photograph Lana Del Rey looks like a country girl, smiling!, in the 60s about to be snapped up by the Beautiful People on the move to San Francisco. No more 1950s chic. Does that mean that the music has changed also?

Taking the whole album in, yes, it has. The edge that Dan Auerbach gave 'Ultraviolence' had been stripped away for a more smooth sound on 'Honeymoon' and this becomes even more so on Lust For Life. For the bigger audience that seems to be a fine choice, for me it is not. I liked that combination a lot. That does not mean that there is nothing to enjoy on Lust For Life. Towards the end of the album the album becomes a blur though. Too much songs that seem to sound the same. The songs become interchangeable as far as I'm concerned.

The Lorde comparison is not such a strange one. Just listen to the song that opens Lust For Life. 'Love' is a very bare song with Lana del Rey's voice floating over the electronic background. "Young and in love", it must be a nice memory for her. For me it seems that with a song like 'Love' Lana del Rey has surrendered something that made her unique.

Something of the mystery returns with the single 'Lust For Life', a collaboration with Canadian singer The Weeknd. It's a song in which the electronic background doesn't hinder me as much as it did with 'Love'. This suits the Lana I want to hear better.

And then enters '13 Beaches'. Lana del Rey shows here that she could sing the right song without anything behind her and still mesmerise me. Again slow beats and electronic sounds enter the song, but I'm o.k. with them here. This is classic Lana alright. Aloof and warm, detached and longing, all these contradictions balled into one voice.

It goes of and on on Lust For Life. My main complaint remains these beats and electronics that have replaced the atmospherics of her previous albums. Lana del Rey steps into the 10s with Lust For Life. Yet again, I can't help noticing that she lost a part of herself in the process. In a beautiful song like 'White Mustang' I'm distracted the whole time time by the horrible fake drums and disturbing percussion and other noises. It's a shame.

Unfortunately things are not going to be alright between this album and me. And I haven't even mentioned the rappers yet, which I'm not going to do. Lust For Life is just not for me. "Bitches" is a word that does not fit Lana del Rey.

You can listen to 'Lust For Life' here: