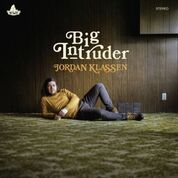 In the winter of 2016 I was introduced to Canadian singer-songwriter Jordan Klassen. The Canadian had moved to Texas to work in splendid isolation on his second album 'Javelin', which met with extremely favourable wording on this blog.

In 2017 The Big Intruder is released and Jordan Klassen decided to do everything differently than with 'Javelin'. He stayed at home in Vancouver to work on and record his new album, studied the music of the great, Lennon-McCartney, Harry Nilsson, Joni Mitchell. He was through with being a singer-songwriter and the coffee in coffee houses. All nice and well, but do I like this change? That of course is the only question that matters here when all the stories around the album have been told.

How long ago is it that Elliot Smith was murdered or murdered himself? Over a decade certainly. Finally I hear an artist who is allowed to walk into his footsteps and whose songs are more consistent in quality. Jordan Klassen has that same light, almost fleeting quality in his voice and created that dreamy feeling in his sound. Big Intruder is an album on growing up and making adult choices, according to the bio. The result is a near tribute album to one of the great singer-songwriters of the late 90s and early 00s.

The full band sound of Big Intruder is certainly one of the strong points of the album. Behind the dreamy delivery bass, drums, guitars and what I can only describe as atmosphere do all the right things to make the songs come totally alive. Where the album totally succeeds. That can be a strong, alternatively rocking song like 'Dominika' or a smaller song like 'Too Far Gone'. Both manage to to get their uniqueness across.

The change in Jordan Klassen approach to his music can only be called dramatic. From the fairly traditional style of 'Javelin' to the indie pop of Big Intruder is a giant step (I am not familiar with Klassen's first album). Soft psychedelic pop mixes with alternative rock songs, all sung with a high, breathy voice. It is not hard to recognise someone with talent to write a good popsong. On both albums Klassen has me on his side, despite the huge difference in style. A good song is a good song.

The link between the two albums is in a song like 'Housefly'. The acoustic guitar is dominant, the song less alternative. Again the Californian artist Patrick Joseph comes to mind. Klassen and he are certainly connected in the way they make and present their music. Both can easily switch from the grand to the delicate without losing anything of the impact they have on my listening experience. This is not something that a lot of artists can boast of.

In short Jordan Klassen has decided to take his music in a more rocklike direction. I would not have minded another album sounding like 'Javelin'. I had only one after all. Now that I have Big Intruder in my possession I can only say that I'm quite happy to have added it to my collection. Songs like 'Hard Hard Heart' are a lot of fun to listen to and Big Intruder holds several more of these. It's time for you to find out, dear reader.

You can listen to 'No Salesman' here: