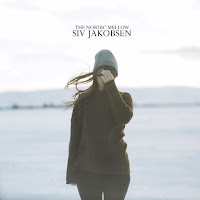 It took me a short while to get used to the voice of Siv Jacobsen. That what sets her apart from many of her sweet-voiced colleagues, is also what stopped me from listening to her music with the right ears, the right mindset.

Siv Jacobsen is a singer-songwriter from Norway and is compared to Laura Marling and Ane Brun. That may be the case, I'm not so familiar with either. What I hear is in line with over 40 years of female singer-songwriters who tell their stories over modest music, often based on the guitar, going all the way back to Joni Mitchell. Her presence can't be denied on Jacobsen's first album, The Nordic Mellow.

Jacobsen starts her album in a most vulnerable way. Just a guitar, I can hear her fingers sliding over the steel strings. Her voice brittle and solid all in once, with its unusual tone, with a quiver and all. Soon strings, a bass and modest drums are allowed in. Creating a totally different atmosphere from how the song, 'To Leave You', started out. This interesting change is what drew me to the album in one of the listening sessions. It told me to start paying attention.

When a singer-songwriter dives as deep as the marrow, it is important to catch on to the emotions that are shared. That is the first prerequisite to "drag" myself through an album. Secondly the voice has to be agreeable and thirdly when playing solo the guitar work has to be exceptional. Otherwise working with a producer who dresses the music up is a conditio sine qua non. Her playing is impeccable, but I'm not sure enough whether it could carry a whole album on its own.

Siv Jacobsen travelled to London to record The Nordic Mellow with Matt Ingram. He produced Laura Marling and Lianna La Havas, but also e.g. drummed on Florence + The Machine's latest record. Together they worked on arrangements and so fleshed the songs out, giving The Nordic Mellow, not so much an unique, but certainly a very own sound. The mix by Dan Cox is spacious, giving all the instruments the room to be truly present and Siv Jacobsen the ability to be the true centrepiece of the album.

In this way an album was created that stops space and time for a while. There is simply no hurry. Things are as eternal as the fjord Jacobsen is standing in front of in the pictures. The album is over soon enough, yet in that period of time Siv Jakobsen has created a timespace of her own. If there's anything special about The Nordic Mellow it is exactly this. Even when things get urgent, the drumming in 'Berry & Whythe', it is to score a minor point, not to change the course of the album. Ingram packs his kit back in and returns to creating the mood. A mood that is intense, but without being oppressive. A delicate basis in which the duo found a great balance allowing the other instruments to support the basic tunes.

Siv Jakobsen tells us that the ten songs stem from frustration. That may be the case, the outcome is extremely positive. An album filled with beauty. Songs about love, not in love, too much love, uncertainty about the other's love. Whoever is addressed, in all cases the person addressed knows exactly where things stood at the time of writing and recording after listening to The Nordic Mellow. The title seems to be more appropriate for the music than for the lyrics.

One of the songs I would like to bring forward is 'Berry & Whythe'. Next to the fact that this is the loudest song on the album, it is also the one that lays bare an influence the most. 'Berry & Whyte' is Siv Jakobsen's 'Big Yellow Taxi'.

From there the album folds back in on itself again. With just a guitar and a voice, before a string arrangement joins again. Together it is a pleasure to listen to, ten songs long. All reservations have been set aside. The Nordic Mellow is a debut album many artist can only dream of and never reach. There is a downside though: Siv Jakobsen has raised the bar extremely high for herself for whatever is to follow.

You can listen to and buy The Nordic Mellow here: