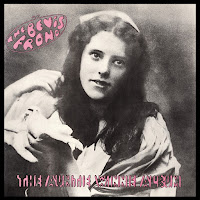 Following the re-release of four The Bevis Frond records this spring, Fire Records released another bunch of records by the band in late summer. Again I selected one randomly to see what I arrive at this time around. All the cds, including all the extras that are awarded us, is simply too much to muster in a short time.

For the second time I am surprised by the consistency The Bevis Frond presents. 'The Auntie Winnie Album' is an album that shoots out in ever so many directions. Consistency in the way of clinging to one, perhaps two styles, is far from what this band is interested in. Alright, I haven't heard opera or house, but many other musical approaches are available. In offering quality it certainly is interested.

The album opens with a shredding version of symphonic rock. 'Malvolio's Dream Journey To Pikes' could be an interesting foray into fishing, but certainly is an instrumental track that nearly kills the song instead of the pike or the dream for that matter. After that all goes. Sixties psychedelia, indie rock, rock and roll Johnny Winter style, you name it, you've got it.

The Auntie Winnie Album is The Bevis Frond's sixth and originally released in 1988, making it 29 years old at this point in time. On the album Nick Saloman is playing his guitar like there is no tomorrow. His love for Jimi Hendrix is shown throughout this album, yet there is a lot of detail in other instruments. Perhaps because Saloman plays them all himself. The guitar is the thing here though. Not unlike Frank Zappa Saloman solos all the way through a song, with the important difference that the song structure is (much) more conventional, so easier to listen to.

When all is said and done though, I like songs with a head and tail, including lyrics, better than an instrumental one. It needs to be said that instrumental excitement certainly is part of the whole here. When 'Close' comes around after the instrumental 'The Miz-Maze' I'm just a little bit happier. This 60s outing with late 80s guitar work, is just so good to listen to. Nederbeat all over again with its organ in the background and a loud guitar supporting the spacey lyrics. The Jam meets Shocking Blue. Something like that and more as The Bevis Frond adds a (loud) guitar.

Other songs are more West Coast psychedelia The Byrds style. 'Repressor' and 'Without Mind' hold that jangly sound and typical way of harmonising that a song like 'Eight Miles High' has.

Against all the signs of the time The Bevis Frond dabbed in psychedelia in its many guises in 1988. In the 10s the band would have been very much in its place. Psychedelia is all over the place for several years now, but no band is as versatile as The Bevis Frond. Most stick to one side of the picture. Not this one. Everything can come by and in era where house started to rule, grunge was in its infant shoes, Crowded House started to top the charts and 60s heroes were working hard at finding their voices back, to continue their respective careers in a successful manner, The Bevis Frond must have stuck out like a sore thumb.

Will that change in 2017? Most likely not. At the same time Nick Saloman is still active and releasing records. The fact that his records are re-released means that a whole new generation can become familiar with his work or someone like me who was around, but hasn't heard a single one of his records at the time. The acquaintance is quite fine, I can tell you. So go out there and spread the news.