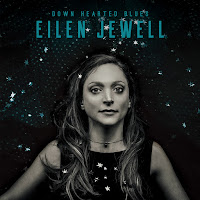 Over the passed years I had heard one or two albums by Eilen Jewell, perhaps even reviewed one. Working in what in general is called the Americana genre, I was somewhat surprised to find Eilen Jewell emerged deeply into the blues. Now the title of the album, Down Hearted Blues, may give something away, it's not the same as a full fetched (electric) blues album.

It is exactly that what Eilen Jewell presents. She explores several blues genres on her new album. So in that she is not so far away from what The Rolling Stones presented to the world late 2016. Down Hearted Blues is filled with covers from A to Z in which Ms. Jewell delves into the American blues songbook and comes up with a whole lot of songs I'm not familiar with. Songs by Charlie Sheffield, Bessie Smith, Howlin' Wolf, Memphis Minnie, etc. come by. One a boogie, the other in the lounge blues style of T-Bone Walker or an up tempo country style rocker.

This mix is what makes the album so interesting and irresistible to listen to. With a clear voice with only the faintest of a rasp on her vocal chords Eilen Jewell sings the songs with self-assured bluster, giving the album its little extras. The musicians behind her all do a fine job. The sound as a whole is great; but, I can't but face the fact that it's all been done before. It's the singing that makes Down Hearted Blues come alive.

The songs on Down Hearted Blues are now from near a century old to at least a half century. All the people who played and sang on the originals have passed away long ago. It is a good thing that these songs are brought alive in the 10s, an incentive to delve into the musical mines once again. I have to own up that I still haven't heard Bessie Smith sing ever as far as I'm aware, yet play one of her songs with my own band (in the Derek and the Dominos version).

Like The Stones half the fun is hearing songs like this in a fresh way recorded on modern equipment that the original artists could not even begin to think of in their day. The other half is the obvious joy of the present artists of playing these songs. Jewell loves playing and singing these songs and it shows. The result is a modern sounding blues album that does right to the different styles in which (rhythm &) blues have presented itself through the years and places.

For someone who at first doubted whether she, a white girl from Boise in Idaho, had any right singing the blues, Eilen Jewell came out quite alright. Yes, great fun Down Hearted Blues is.

You can listen to and buy Down Hearted Blues here: