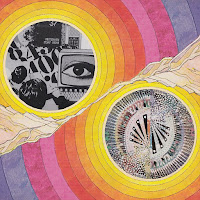 It took Mutemath a while to get to me. To use the title of the band's new cd, I played dead for a while. After the third song I could not get through the album, despite liking the first songs. That changed with investing some more time in Play Dead.

Looking into Mutemath on Wikipedia I find a band from New Orleans that is around since 2002 and releasing music since 2004. That is a long time without me having heard a single note. That changed with Play Dead, the band's fifth album.

The album opens with a song that has a distinct prog flavour. It holds faint traces of the Alan Parsons Project, Yes and what I have heard from someone like Steven Wilson recently. 'Hit Parade' is the kind of song that catches my attention. Not just because of the grandeur its exhumes, I am not that big a prog fan, but also because of the pop element and the little elements of madness that pop in and out like a Tourette syndrome sufferer on parade. It makes for an intriguing song with a lot of surprising elements on display and hidden.

The change to the next song is somewhat large. 'Pixie Oaks' is a much more straightforward pop rock song than 'Hit Parade'. A tight, accented rhythm guitar sets the pace for the verses, where the chorus somewhat explodes. In sound the likes of Vampire Weekend come to mind, which is quite a long way off Yes, to name one. Surprising perhaps, but 'Pixie Oaks' also catches my attention and keeps me on my path into Play Dead.

The Madchester rhythm of 'Stroll On' is the next surprise. Especially when Alt-J elements of estrangement move in as well. With the word estrangement, Play Dead is typified quite well so far (and later on). In all songs something happens that sets the listener in another environment than he thought he was. Without disturbing this listener too much. That is a feat. What I do notice is that a dance element has gotten into Play Dead, including some digital scratching. And that is where things went wrong.

In 'Break The Fever' the, odd, rhythm (and a vocoder) take the upper hand. If I wanted to listen to disco, I would have become a fan in the 70s, which I didn't. That is where Mutemath lost me.

Recently I reviewed the album 'Nocturnal' by the German band Nazz and wrote how the band went from a to z and back, over backwards, and how that put me off in the end, despite hearing several nice songs. Mutemath also gives me the idea that all three members have totally different musical tastes and that all three are in control of their own songs, making the band a ship without a rudder.

This is an observation that may hold true. Fact is that after listening better, I find that 'Nuisance' is a small, electronic, but certainly nice song. The pop of 'Placed On Hold' is full of melancholy, where singer Paul Meany captures the atmosphere in a great way. Again a switch from what went before, including a great guitar explosion played by Tom Gummerman, who can finally show what he is capable of.

By then I seem to have accepted the curve balls Mutemath throws at me. O.k., some disco. Why not? Even Arcade Fire does it. I believe it when the band says it did not have any rules when writing and recording Play Dead. Every idea that came into the members' heads was pursued and worked out. Some of it into songs that I have come to like and some that I have come to accept as part of this whole. Like 'Everything's New'. Disco with some great music in there that keeps being interceded with odd balls and weird interruptions.

And so Play Dead continues for a few more songs. I guess you have gotten my drift by now. Mutemath isn't going to be caught in one hole. You have to search for them in many holes and never sure in which one they will be now. Call it versatile, surprising or musically suicidal, Mutemath seems to be getting away with what it is doing on Play Dead. It certainly grew on

You can listen to 'Hit Parade' here: