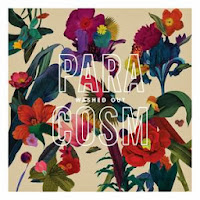 One of my favourite paracosms of all times is Terry Pratchett's 'Discworld', a fantasy world, flat, born on the shoulders of four elephants standing on the back of the Great A'Tuin, the cosmic turtle, flapping though space. A world full of semi-Medieval humans, trolls, dwarves, werewolves, imps and what not's. Another Paracosm I started warming to, is the second album of Washed Out.

Washed Out is Ernest Green, a chill wave artist, singer-songwriter and record producer, from Perry, Georgia. After releasing a few EPs, Washed Out debuted with the album 'Within and without', a title reminiscent of George Harrison's contribution to The Beatles' seminal album 'Sgt. Pepper's lonely hearts club band'. Listening to Paracosm, this reference is not so strange as it may seem. The songs on Paracosm all have a spiritual and slightly psychedelic undertone. They seem to float on the everlasting waves travelling through deep space. Just like the elusive singing floats on the music in a form of oneness. Something that always seems to have been there.

The laidback character of Paracosm brings with it that I have to be in the mood to listen to the album. The layers and layers of keyboard sounds and mechanical percussion put the singer in a trance, singing his lyrics in a permanently undercooled style and performance.

The first real surprise of the album comes with 'All I know', an 80s hit if I ever heard one. The best pop elements of Nik Kershaw, Howard Jones and Thomas Dolby come by and are mixed with the power of 'Working with fire and steel', one of China Crisis' best songs. This way Paracosm holds on to its coolness but adds tempo to the album. 'All I know' is one of those songs that surprises, because it comes from a form of music that I do not like, but is too good to resist. Like 'Wouldn't it be good' is the only Nik Kershaw song I could ever really listen to.

It means that Washed Out is walking a fine line with me. The music has a dance or even hip hop beats undertone, but built up with melody and layers of sound. The sort of music I usually do not really go for. This goes to show on the one hand that there always are surprises, but also that Paracosm is not an album that I can listen to every single day. I enjoy it sparingly in mellow moments. Getting mesmerised by the harplike sounds in the title song, but mostly relaxing on most of the sounds of the album.

A last influence that I notice is that of The Moody Blues. The music of Washed Out also has, although more hidden. symphonic elements in it, but mostly that sort of compact sound that is a staple in the sound of The Moody Blues. A sort of musical carpet that last from start to finish of a song, where all else that is going on there, is carried and comforted on. A technique Midlake is also capable of creating. All this goes for the style of singing as well. It is very similar.

Washed Out is the product of Ernest Green's mind but one other person deserves a mention. Ben H. Allen was involved on all tracks in one form or another. Whether as co-musician, as in "real" instruments, production or mixing, his hand was fairly big on this album.

Towards the end 'Falling back' is another more up-tempo 80s track of the very much better sort that wins me over to this album even more. A guitar and bass intro, a golden melody, so much fun to listen to. It adds flavour to Paracosm, the necessary variation every good album needs. I wouldn't be surprised if this Paracosm would someday turn up in that other one as some sort of future music.