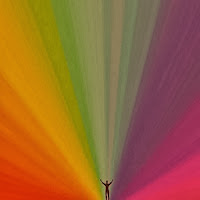 In the one and a half year this blog is running, this is the second issue by the Californian collective known as Edward Sharpe & the Magnetic Zeros. The band's signature song is from the Ikea commercial. Most people will not even realise that there is a career behind this happy sounding song called 'Home', from the debut album 'Up from below'. Released in 2009 'Up from below' was followed in 2012 by 'Here', which found a favorable review here. Just over a year down the line album number three is released and let's take a closer listen to Alex Ebert c.s.'s new album. (I wonder whether there is a clear intention behind the three album titles. Three clear steps.)

At first listen one thing has not changed. Edward Sharpe ... is still this modern manifestation of the pop choirs that the Catholic church introduced to keep the youth interested in churchgoing in the second half of the 70s. The album holds these happy and upbeat songs that with some additions or adaptations could be sung in church. Of course this parallel does not hold up when 'Let's get high' totally goes off track in psychedelic outcries, true to the song's title.

What also becomes clear is that the folk influences of the 60s go deeper than before. 'Two' could have been on 'Jefferson Airplane takes off' or most other albums from 1966 released around San Francisco and the basis for a The Mamas and the Papas track. The singing between Ebert and Jade Castrinos capture this atmosphere in a great way. All this makes a giant step away from the new folk(rock) movement that Edward Sharpe & the Magnetic Zeros were put into. Edward Sharpe ... goes so far beyond what usually happens. They seem to delve into gospel. 'Please!' could have been on the b-side of The Edwin Hawkins Singers' 'Oh happy day', while for good measure there is some George Harrison like lead guitar lines. Listen good and there is soul music to be found here as well. And 'The village green' era The Kinks. It's all here and nearly all's sparkling.

All this makes Edward Sharpe ... a nostalgic trip to the space age cum the more pop and rock oriented folk explosion of the folkies gone electric in 1965 and 66. The Byrds, the bass sound of 'These boots are made for walking', the singing all is invariably retro. Having said that, it's time to step beyond that and listen intently to what is on offer. In short, at times what is going on on Edward Sharpe ... is breathtaking. In a way that is modest and brazen at the same time Edward Sharpe & the Magnetic Zeros show growth by reaching back in time to find its natural habitat. 'Life is hard' is strange, beautiful and daring. Not an easy song, no party song, but true to the form of this album where experimentation goes hand in hand with(in) traditional songs.

What makes me worry though is the voice of Alex Ebert. At times his voice sounds like it's strained beyond duration. Like it is painful for him to sing. So perhaps some singing lessons are in place here. For Edward Sharpe ... it is not yet much of a problem. Singing and songs go very well together. But in a soft psychedelic song like 'If I were free', with all its Traffic passages, changes and voice treatments, it does sound too frayed.

Towards the end of Edward Sharpe ... my attention span seems to leave me, making Edward Sharpe ... not the perfect album. A song like 'They are wrong' is a bit too much Lee Hazlewood to my taste for example. What the album does show is that Edward Sharpe & the Magnetic Zeros dare to explore in different directions of pop music and regularly finds very interesting results and at times less interesting ones for me. What it also shows is that it has the ability to come up with a perfect album in the future. Edward Sharpe ... is another leg in a quite interesting journey. And to finish off: a song like 'Remember to remember' makes up for any loss of attention span. This song is a journey in itself. All in all the album is as colourful as its cover.

Where Edward Sharpe ... truly comes back to form is in the bonus songs. 'Milton' is utterly fantastic, just like 'When your young' is another gem stuck away in the extras. And then it is all over, seemingly in the middle of 'Milton' silence remains and awe struck.