The right side won. What Fun! 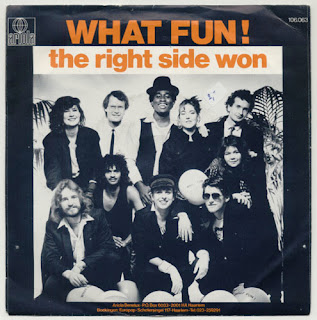 This weekend a song was played on the radio that I instantly liked. "Serious Talent" on 3FM the DJ said, but that was all I got. Yesterday I heard it again and surfed to the website of 3FM. The song is called 'AAAAH' by new Dutch pop band Taymir. But what happened next is a bit more surprising. 'AAAAH' put a thirty year old song into my head that hasn't left me since, so why not write about that?

The right side won was a number three hit in The Netherlands in 1983. The song was picked up by Radio 3 as 3FM was called then (or was it even Hilversum 3 in 1983?). In those days it still made a big difference on what day I listened, because the airtime was split between different denominations. On Tuesdays (with the Wednesday afternoon) was the best day. VARA, the labour broadcasting organisation, played the "better" sort of pop music and it played The right side won first. Not surprising, because the song has notibly anti-Falkland war connotations. (I just read that on Wikipedia.)

To me it always meant more than just that. In 1983 there were lots of political movements in The Netherlands, mostly aimed against right wing dictatorships, Israel, South Africa, industry, etc. For some reason or another left-wing dictatorships were not that bad. At least not a lot people bothered to protest against them.

Looking at the text of the song, this association is not far beside the point. "The right side won. God's on our side. It had to be done, it's pity men died". Things happened that "they" could not allow. "They" usually being generals and colonels that could not stand the situation in their respective countries and rode out of their barracks to commit a coup. Followed by repression, torture and disappearances of people. As such the song was the right one in a time of mass demonstrations against nuclear bombs, the violent squatters' riots, the arson against companies doing business with South Africa and the bombing of a politicians private home. Forms of left wing protest that has disappeared in the 10s.

What Fun! was a reggae band from Haarlem. A band that scored one hit. Since 2005 they are playing again, but not in a way that I've noticed. A multi-cultural band, which was not as normal then as it is now. A large band also, with horns and background singers and all. The music of The right side won is a mix of up-tempo reggae with pop. The staccato rhythm is infused with a great melody and horn solos in all the right places. Yes, not unlike UB40. The call and response singing is done just in the right way. Singer Martin Richardson sings and half raps in places, while the three girls respond to him or declaim "That we're in the right". It's this line which is the apology that is still heard all around the globe when one person or movement or political party claim to be better than another. When things usually take a turn for the worse for everyone against this movement or not agreeing. The rhythm of The right side won invites to dance, the main theme of the lyrics to sing along.

My guess is that the song was picked up first because of the political message and that everybody afterwards just sang along because it was such a fun song, i.e. a hit. The right side won is a sort of song that is seldom made nowadays. Songs no longer deal with issues, but with abstract feelings or personal observations. Yes, sometimes things were better in the past, people wanted to or dared to take a stand. There were things to take a stand against. So, when is the first song and a hit at that, written on mass surveillance or against Russia's homophobic laws, etc.?

The right side won, which I played for the first time in years if not over a decade today, has lost nothing of its power. It is still a protest song with a great melody, intricate and special. But most of all, the overall message thirty years down the line still rings true and that is no mean feat in itself. "That we're in the right". This phrase is the apology heard all around the globe when one person or movement or political party attest to be better than another. It makes that the message of The right side won is still very true today.

What Fun! released another single 'Let's get digital' and I have an EP, if I remember correctly, but the new songs never matched The right side won. The band quit in 1989 anonymously, with one #3 hit to its name. A song that deserves to be heard again.

I still haven't figured out thought what the link between 'AAAH' and The right side won is.

You can listen to The right side won here.
Gepost door Wo. op 16:51