Over land and sea (3). Lauren Mann & the Fairly Odd Folk 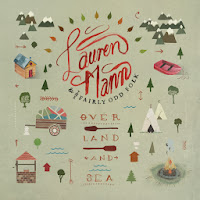 This spring we ran a review of Lauren Mann and the Fairly Odd Folk. Following the album we did an interview this summer (click here). Recently we received this e-mail:

"I'd like to let you know about a FREE album download that we currently doing. Right now on noisetrade.com you can find our full album Over Land and Sea, along with a b-side called A Traveller's Anthem.


here is the direct link to the FREE download.

If you can please share the free music download link with your friends via facebook, twitter, email, word of mouth, etc that would be a really big support to us.  Probably bigger then you could know.  Please consider posting it.
We also launched a funding campaign to help us with our next album.  I won't go into the details, since they are all posted on the campaign, but I would ask that you check it out, watch the video, and read what we wrote so you can get a full idea as to what we're aiming to do.


You can find our IndieGoGo Campaign here.

That's it, please check out those two links and share them if you feel comfortable doing so.
Thanks so much everyone!  I hope you're all doing well.

And as always, feel free to write back with any questions/comments/input/etc.

LMATFOF",
which we decided to follow up on. So here's the review once more and do go listen to this beautiful album on Noisetrade.com.
Over land and sea.
For a band with a fairly odd name, it makes pretty normal music. Lauren Mann c.s. was thrown into my lap through a website called Noisetrade, where music is available for free. The artist can be tipped as a courtesy. In the passed weeks several of these albums have come by on this blog as a courtesy from us to them.

Lauren Mann comes from Calgary in Canada, but now the open road is her home, touring relentlessly sharing her music around the country. Her Fairly Odd Folk are musicians that she gathered around her in her starting years. The nickname the band got, stuck. Jay Christman  plays drums, bass, percussion and acoustic guitar, Jessica Christman's on bass, aux keys and BGV's, Josh Akin plays electric and acoustic guitar as well as banjo and Zoltan Szoges plays keys, melodica, glockenspiel, percussion and clarinet. Lauren herself also plays piano and ukelele. It goes to show how diverse the sound of this band is.

Lauren Mann has a very pleasant voice. High, light, a direct pleaser, because she stays on the safe side of the likes of Dolores O'Riordan. Just a voice is seldom enough for me, so let's go into the music. Starting the album is 'Fragile', a beautiful small song with these fun, single notes piano accompaniment and 'I lost myself'. Not another new folk band, I thought? Everything is there, the mandolin/banjo/ukelele, the typical drums, the way the dynamics work up the song. Not to forget the happy whistling and singing along. Hearing 'I lost myself' for the first time, I heard an instant hit. There's even a hint of ABBA in there, a rare mix, but it works.

It is after 'I lost myself' that Over land and sea started to surprise me. Lauren Mann and her Folk take routes that are less obvious for a new folk band. In fact they aren't one. This is a pop band if I ever heard one. Over land and sea is a fun, mostly up beat album, while at the same time venturing into songs that are too sweet to my taste. In 'Dance with me' it is only her voice for me to hold on to. The rest is to sugary and sweet. Other songs are so intensely beautiful that I'm being shaken around like in a bumper car ride at a county fair. Taking it all in Lauren Mann plays what can be called new folk or folk rock, but is not afraid to throw in a ballad or pop song. The Fairly Odd Folk do everything to make her voice shine and with that themselves.

What I also really liked is the trick the band does at the beginning of 'Weight of the world'. It starts out all happy sounding with glockenspiel and all and then starting this serious song on depression of someone close. It set me off totally on the wrong foot.

One of my first impressions is that fans of Ilse de Lange should really like Over land and sea. I'll test it on my girlfriend soon. (Yes, a positive advice was given!) At the same time there is enough to enjoy for fans of a bit more rough pop. The songs in the folk pop and rock idiom are all spot on. The title song is so much fun to listen to. Upbeat with these undertones that makes me listen again. 'Like the mist' is a beautiful ballad. Lauren sings that she is "searching for beauty". I tell her to stop right now. You've found it, dear lady. Her clear voice, the perfectly sounding cymbals, the sparsely played piano notes, a great guitar line. 'Like the mist' is sheer beauty and a perfect way to end the album. A great promise for the future.

Over land and sea is the second album of LMATFOF. In 2010 'Stories from home' was released. Although I'm not familiar with the album, it can't be any any other way that Over land and sea is a tremendous leap forward. A singer that is so comfortable in very different songs, admitted, not all sit well with me, can go anywhere in the future. Despite this personal dip, Over land and sea is a beautiful album clearly made with love and dedication fitting right in with the times and offering that little extra too. Best of both worlds it is.

And all this time I was thinking of whom does Lauren Mann's voice remind me? And then I read her last name again .... well, Aimee of course.
Wo.
Gepost door Wo. op 11:48