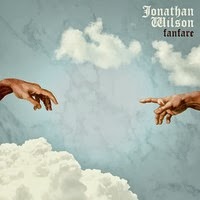 Listening to Fanfare is a weird experience. It's like listening to a long lost album by Frank Zappa, that I somehow missed in 1980. Or listening to the long lost album of Pink Floyd from 1974. Not to mention The Beatles' breaks in 1968. Crosby & Nash in 1973? And all that sometimes at the same time. New surprises come with each new song. To my ears it seems like Jonathan Wilson has taken his old, vinyl collection in his hands, shook it as hard as he could, stacked the deck and then made a record with what came out of that.

Jonathan Wilson is a recording artist, producer with credits like Dawes and solo artist. Fanfare is his third solo album following 'Frankie Ray' (2007) and his breakthrough album 'Gentle spirit' (2011). The LA connection is all over his music or more specific Laurel Canyon, the place where a lot of the then young and hip people of the 1970 LA scene moved to. Born in 1974 in the south east of the U.S. it is not a period that Wilson actively participated in, but certainly emulates here.

For one thing, from what I'm hearing, Wilson has done this with great class and a fine ear for detail. On the other hand, the overpowering way the album kicks off, makes the middle part a great surprise. The jazzy singer-songwriter style made best known by Crosby, Stills and Nash is on centre stage here. Singing, atmosphere and all. The contrast between the relaxed song and the intense singing is always something that I have to get used to, get into the mood for, something which I do not always manage to do. Here it surprises me even more, because it comes so unexpectedly. From the form of singing, to full songs in that style like trippy and jazzy 'Cecil Taylor'. Jonathan Wilson does not mind to add a song in the style of Neil Young to it straight after: 'Illumination' is a 100% Dinosour Sr. in intro and form. Not singing as no one has a voice like old Neil. (What would the response of his school choir director have been?, I sometimes wonder.)

All this shows why I have a hard time to warm to Fanfare as a whole. There's no song the same, which is also a good thing of course, but I get the impression that Wilson was asking himself each week: 'Who am I going to honour with a song now'? The result is that Fanfare is an album with a lot of different influences that do no so easily gel into an album. Also this question begs for an answer: Who is Jonathan Wilson really, musically?

Heaving said that, the next comment has to be that most songs of are an extremely high level. The playing and composition are all very well done. The pleasant surprises of recognition add to that. On the other hand the album is lacking of emotion. Most songs are sung undercooled, yes in a seventies Steely Dan (or Gino Vannelli) sort of way. The songs are not as complex as that, still they are well crafted. It is this qualification that has made me listening to Fanfare again so far. There is definitely something in here that could me go to really liking it. That is not yet the case though. I'll admit that it can go both ways at this point in time. What Fanfare and Jonathan Wilson have done, is intrigue me. Isn't that where truly liking an album starts? It can either be through love at first hearing or through really investing in an album that is worthwhile investing in. All the rest I leave behind. Fanfare has the quality that makes it worth my while to invest in it.

So, to sum here. We will have to see where Fanfare and I will go. Ask me again a few months from now.