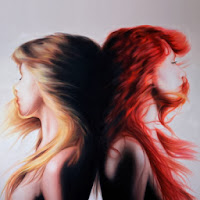 After 'Ride your heart' by Bleached, and 'Silence yourself' by Savages here comes another hard rocking album by a couple of ladies. The California based duo consisting of Lindsay Troy (voice, guitar) and Julie Edwards (drums and vocals) is only around since 2011. Listening to the music on Sistrionix makes it hard to believe that the ladies met at a needlework class. To make it even harder to believe is the word crochet class. Sounds like a good bio spoof to me. But who knows, perhaps even the most vile rocking ladies have to darn socks at times.

Whatever happened, Troy and Edwards did find each other in a mix of blues and rock not very unlike the duo that has become the comparative standard in the genre, The White Stripes. Deap Vally isn't that good yet, but knows how to kick up a storm. Troy's guitar squeals and howls like an entrapped animal. Deep distortions are barely kept under control. Feedback is just one flick of the finger away. Edwards pounds everything full as to not get too much empty spaces in the sound. There's some great riffing going on. The intro riff to 'Creeplife' is extremely convincing, but that goes for most songs. Troy comes up with something interesting in most songs. This is a necessity in a duo setting. The melody and the guitar is all that is going on to distance one song from another. Not taking anything away from the drums, if you listen to 'Lies' you'll hear how inventive some of the breakes are, it is the rest that decides whether the song is a winner or not. The thought strikes me how close this music is in its purest setting to a singer-songwriter. Without an interesting riff or melody, there's not much left. Looking it from that angle Deap Vally has a winner on its hand.

Garage rockers can totally go off on Sistrionix. The sound is dirty in all the right ways and rocks in a punky way. "I love rock and roll" is a right description, and add a little wildness to this mix, unpolished and rough. Deap Vally is allowed to rock out, without taking the rough edges of its sound. 'Bad for my body' is loud, has a refrain to sing along, with Lindsey Troy singing as if she's about to puke all over her mother and image. Her voice seems at first listen not completely right for this kind of music, but this impression proves itself totally wrong. She has that sneer in her voice, that makes it in combination with the music just perfect. It is not the most powerful voice but has that brutal snottiness that makes her a punk singer in a garage rock band.

Sistrionix is not yet an album that can compete with 'Elephant', 'El camino' or 'In time to voices', but all these albums are not debuts. There is no telling where Deep Vally will be in in 2017 or 18. Judging from the music on offer on Sistrionix it may well be that the two ladies have more in them and with the right progression on the next records and experience from playing more, who knows? This debut is fun, with some great melodies and loads of energy. As a debut Sistrionix works, so why doubt? Enjoy the fun and music. Deap Vally has the looks, the songs and the music. Seems like the best of all worlds. Let it rip, ladies.