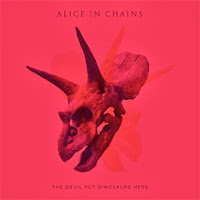 Not unlike other bands of grunge era, Alice in Chains is back and making music like it’s 1995. Almost like nothing has changed. As if singer Layne Staley hasn’t died. And why not? It is not as if the band has lost its right to exist. Guitarist/singer Jerry Cantrell was responsible for at least 50% of the sound and songs of Alice in Chains. Replacement singer William DuVall has indeed the right way of singing, as has Jerry Cantrell. A sound that exhumes death, misery and unhappiness. The fun thing is that Alice in Chains has this little extra in 2013 compared to 1995: life and some humour on the side, if we judge the album title to start.

Alice in Chains was part of the Seattle sound and scene of the early 1990s, what we have learned to call grunge. The deep, dark sound was matched by the singing. Not really my cup of tea. This changed somewhat when the band released its eponymous album in 1995. With a few great, sludging and grinding songs like 'Grind' and 'Heaven beside you', they did win me over for at least 50% of that album. After that the demons got the better of singer Staley and except for a so-called unplugged album for MTV, never was heard from again, with the predictable overdosis as the inevitable end. Sad is the only correct word here.

Starting all over in the late 00s, The devil put dinosaurs here is Alice in Chains’ second album since. I liked it from the first playing. What the band in its new incarnation is capable of is mixing a few other influences into the grinding and harsh music. Proglike guitarharmonies and sound in ‘Stone’ or a popinfused refrain in ‘Voices’. It is these little diamonds that show through thanks to the hard polishing the band does elsewhere that make The devil put … so much more interesting to listen to. Most songs have more air in it once we leave the opening duo behind. Allowing details to shine through. Allowing the listener to hear what Alice in Chains is capable of also.

Perhaps it is contradictory to write the words “warmth” and “playfulness” in an Alice in Chains review, but they are spot on. Despite the darkly, emotionless sung words, multi tracked for the extra dark effect, and slurry execution of it all, light shines in the different guitar parts Jerry Cantrall has laid down. Arpeggiated notes in the title song combined with the darker sparse notes. And although Sean Kinney’s drums roll dark and deep, the time signature allows for these beautiful fills on the hi-hat, creating rest and air in the relentless pounding. To my ears that makes the music of Alice in Chains so much more fun to listen to. There is life and light let in and that happens to be the part of life I like best, a lot even.

What I also like is that Alice in Chains comes close to one of Jeff Buckley’s best posthumous songs, ‘Yard of blond girls’. ‘Low ceiling’ has the same rolling rhythms and playfulness of this song covered by Jeff Buckley. Cantrell adds a beautiful progsolo to this mix. More variation and more fun. This way Alice in Chains mach II is not just an emulation of Mach I. The band has allowed itself to evolve and not just sticks to what we already know. More points go the The devil put … here. The basis may not have changed, the icing certainly has. There is so much more to discover, the melodies are so much more varied and the sounds so much more pleasant, that Alice in Chains has become the better and more interesting band for it. If we hear how a song like ‘Scalpel’ is built up. From an acoustic guitar based song, to a great harmonic chorus and well-crafted verses, all fully fleshed out. More kudos here.

What The devil put dinosaurs here shows is what a big difference a little sunshine makes. Alice in Chains has come up with an album that can be called nice by Alice in Chains standards. It makes all the difference to me. Great fun.

You can listen to 'The devil put dinosaurs here'.
Gepost door Wo. op 12:32