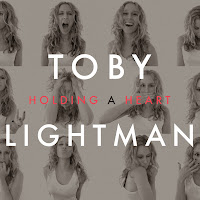 And again time to give some attention to an album that is given away for free on Noisetrade.com. Holding a heart is a five song EP by Toby Lightman. Toby is a singer songwriter from New York who is actually active for nearly 10 years as a recording artist. Holding a heart is her sixth release since 2004.

Holding a heart is an EP that tries to find a spot in the well-filled pool of female singers that followed the breakthrough of Lily Allen circa five years ago. At least that is the idea she puts into my head listening to Holding a heart. That makes the competition fierce. I have to follow that by the comment that I do not know most of these album and singers. Some songs were sort of unavoidable for any one leading a normal life in the western hemisphere. They are everywhere. A few songs I even truly liked. Like Lily Allen’s ‘Fuck you’, a brilliant little hit of an ironic song.

Holding a heart has that same sort of heaviness borne through irony and a sense of lightness.  Which I;ll try to explain some more below.

How does Holding a heart come to be reviewed then? It found a spot on my i-Pod after downloading it from Noisetrade and started to come by. The first thing I heard was Toby Lightman’s clear voice, which is mixed over the music. Up front and thus in my face: here I am. No hiding, no masquerading. She really presents herself vocally. The second thing is that there is a wide variety of songs presented by her. The third thing is the upbeat air, with enough of a serious undertone to make Holding a heart stand out. H-E-L-L-O is the best example on Holding a heart. It sounds at first like it is going to be this fun sort of song, but slowly the mood shifts. Somebody is not here who is supposed to be. The mood is just set in the right way, making the song very much worthwhile listening to.

The same goes for the song that ends this EP. ‘Wheels’ has a bittersweet connotation, so much in contrast with the poppy ‘We are’ that starts Holding a heart. Hand claps and all. And even this song set me on the wrong foot totally. It starts all bright and poppy and then changes mood very slowly until even the la-la-las in the background do not seem to know which way to go, hesitant and uncertain. And then it also ends within the minute too, easily. Confusing, intriguing, interesting. Over before I realised it and wanting more.

The great pop single of Holding a heart is ‘All I silence’. Guitar outburst in the Coldplay style, spicing the chorus. The light and the shade let into the song, that is is just loaded with dynamics. Personally I do not think this is the best song of the album, I can understand the more prominent place. The refrain is an earcatcher. The “shut ups” clearly in the line of lily Allen's 'Fuck you'. The third song and title song is the most serious. Close to a singer-songwriter song. It shows the ambition of Toby Lightman. An ‘Eleanor Rigby’ kind of song, in between pop and classical music.

Holding a heart is only five songs long. In it Toby Lightman presents herself in a self-assured way. Daring to venture into several avenues at the same time. Daring to set the listener on the wrong foot, challenging him to follow her along surprises and changes in style and approach. Toby Lightman is far from an arrive, but she managed to intrigue me with her EP and that’s a first step towards a future musical relationship.

You can listen to and download Holding a heart here.
Gepost door Wo. op 06:13