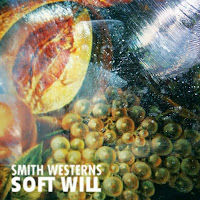 'Dye it blond', Smith Westerns' sophomore album, just didn't find its way with me. I gave it a few chances, but this did not make me change my mind. No matter what other people were saying. It did not have the melodies that made it stick out for me in that vast pool of new music. At first that made me shy away from Soft will, but not rightly so. Songs kept popping up when I had the old iPod on shuffle that made me look at the screen to see what it was. This included Soft will.

Smith Westerns is a indie pop band from the U.S. This is surprising listening to the sound of the band. Also with 'Dye it blond' my best guess would have been the U.K. The band plays with the sound of Travis,Teenage Fanclub, Belle and Sebastian and other softer versions of the Britpop (or should I say Glaswegian) explosion of the 90s. All leading back to that one band with four Liverpudlians that seem to have set the standard here for like forever (and a little to the four from Memphis that never broke big, but who's star still shines brightly). There is something of Fountains for Wayne in a lighter version here also. Several of the songs of Smith Westerns give the impression that spring is breaking and we have an seemingly endless summer ahead of us. Even in these days when the days are shortening fast. Not because of a one big party sound, no, because of the right tone between melancholy and gladness, the sour and the sweet.

Here we have the main difference between 'Dye it blond' and Soft will by the horns. The songs on the latter sparkle, have a certain lightness of tone, no matter the topic of the lyrics. The voice of Cullen Omori is light and sort of floats over the music. The bright guitar and keyboard layers that are spreading out over several songs give the atmosphere a full but pleasant taint. Like the effect of bright colours on the mood of a person. Sometimes a bit too much perhaps, but in general Smith Westerns seems to play all the right notes. Not unlike that very obscure, but not less brilliant album 'Whirligig' by The Caulfields. That album definitely was more outspoken, but is in the same league in intent.

Picking out one single song is no use on Soft will. The album is a stable one. Most songs do not stick out in any special way. Soft will is a beautifully crafted whole of 10 songs that do not outdo nor underscore each other. Like they are not in competition and come up to the finish line as one front. This makes Soft will so special. Not so much the individual songs, as I have heard them better before, even more outspoken. Soft will does not waver for one song, as all are at a great level. Some nudge towards 1960s pop and psychedelia, other to brilliant pop, while other have a more 70s sound. The bottomline is that for each song Smith Westerns finds a voice, a voice that fits the song and perfects the whole.

So once more I let myself be surprised by a band that I thought I could skip. Just glad that I didn't. Soft will is a gem of a record that deserves to be heard by everyone who likes soft pop, a George Harrison like guitar solo every once in a while, modest but great singing and beautiful arrangements supporting the song. Smith Westerns shows great progress with Soft will. Already looking forward to record number four today.