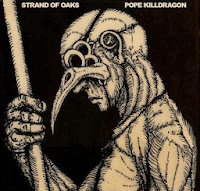 Another pearl that came to me through that beautiful website Noisetrade.com and another chance to pay back a small debt. Pope Killdragon is on my iPod for a while already. It was when I started listening more intently over the last couple of days that I noticed that paying more attention to the songs bared a quiet desolation screaming through the nooks and crannies of this mostly soft and contemplative album.

Strand of Oaks is Timothy Showalter, a singer-songwriter who can compete with many a famous colleague. A singer-songriter with a lot to tell, stories that are not necessarily upbeat; better, they are destitute. His family dies in 'Kill dragon' of the plague and at that point in the album we are in the first verse of the second song. Opener 'West river' is an instrumental, so there you go. Another song starts off that he "lost all his teeth last night".

Pope Killdragon is Strand of Oaks' second album, released in 2010. 'Leave ruin' preceded it and 'Dark shores' followed it, but I'm focussing on Pope Killdragon, as Showalter offered the album to me for free. Pope Killdragon is a modest album in form. Timothy Showalter is there with his voice and guitar. Around him are sparse instruments filling up the otherwise empty space. A bass, an elementary drumkit, a few background vocals. Names that come to mind are Sparklehorse, Iron and Wine, but also Edward Herda, who came by on this blog this spring.

'Sterling' is a song that is blown up to epic proportions. Starting small, vulnerable, with just an acoustic guitar and a clear voice remembering me of someone who keeps eluding me and of Sparklehorse without the small cracks and tape hiss. Singing about the Kennedy's, the songs slowly changes as drums and guitars kick in and a background vocal that is repeated and repeated "I saw him coming", like a drone. Slowly the song goes all out, the electric guitar ripping the song apart, while the rest keeps it together. The dry drums are a treat to listen to. Strand of Oaks plays with its listeners in a great way with 'Sterling'. Perhaps a bit too long, but the way the tension is built up and released towards the end, shows craft and insight.

Strand of Oaks does not reach for great effects only. 'Bonfire' has one guitar at first, a voice drenched in echo and some keyboard sounds. Halfway the song this is flashed out modestly- and it is then that I know who eluded me so far: Damien Rice. Fans of the Irish bard who's quite for years now in 2013, may find a fine replacement until Damien Rice is ready to release his third album. With minimal effect Strand of Oaks hits me emotionally as he combines music and voice in a great way. A mother that gets killed by a bowling ball (reminding me of "Owen Meany"). Strange things happen in the songs of Timothy Showalter. And I listen and am impressed as the album keeps its quality all the way to the end.

Remains a complement for the exquisite cover. Almost like Brueghel etching, Medieval and brooding. Like the Black Death hanging over us. Impressive.

You can listen to or download Pope Killdragon here.
Gepost door Wo. op 17:30