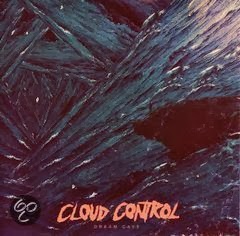 Cave rave? Dream rave? I'm getting confused here. Of course the former is by indie folk rockers Crystal Fighters, also to be found on this blog, the latter the new album of Cloud Control, the band that debuted with that much fun album 'Bliss release'. This album wound up in my 2011 year list, if I remember correctly. So expectations are high. A supple continuation, (great) growth or the much feared difficult second album?

Dream rave kicks of with near retching -in reverse no less- sounds. If that does not announce a difficult one, then what? Luckily the song turns into music and is followed by a familiar sounding song setting me back on track: 'Dojo rising' is all a Cloud Control fan can expect. Laid back rock with some pleasant singing, boy - girl. The relaxation with which Wright and Lenffer follow each other in the singing is lacking all urgency and still spot on. The playfulness of several songs endear them to me instantly. Listening to 'Ice age heatwave' has the trickling of melting ice all over it. The song just sparkles and shines. Like unsuspected sunshine on a cold and cloudy day.

Cloud Control is a band from the vicinity of Sydney, Australia, that makes a blend of indierock and psychedelica. Singer/guitarist Alister Wright, keyboardist/singer Heidi Lenffer, drums and percussionist Ulrich Lenffer and Jeremy Kelshaw on bass and vocals, together are responsible for this blend. One that takes them one step further into experimentation than on the debut album, 'Bliss release'. Vague bathroom hollow singing with a shower dripping in the background? Check, it's here on 'Tombstone'. The final song is a step back in time to a song that could have been sung by the likes of Paul Anka or Neil Sedaka. In atmosphere 'Dream rave' comes very close to a pop song from the late 50s. The only difference is that it is played differently. Not necessarily to please, but to estrange. And again there's all this leaking water from broken or not properly closed taps. That makes the end of Dream rave, the album, as special as the begin.

In between Cloud Control takes its listeners on an aural trip that pleases, surprises, prickles and tickles. On Dream rave Cloud Control manages to come up with interesting vocal melodies, great 'pa-pa-dahs' intros, distinctive guitar melody lines and inventive rhythms. 'Moonrabbit' holds them all in fact. The intro is one big invitation to blend my own voice with those of the band. 'Moonrabbit' is extremely poppy without ever being a hit. So much fun to listen to. In 'Happy birthday' it is the sprightly bass line that draws the most attention. All members get the possibility to have their moment, without forcing it in anyway.

Dream rave even presents us with some dance songs with a few traces of 80s doom and gloom presented with a lightness that plainly make it work. There is a different rhythm, translike dreamy soundscapes made by synths or computers, but it's the singing and the melody that make the songs interesting and hold that vague traces to 60s psychedelia. Overall it gives the album that little extra variety that makes it grow and presents the listener with a lot more to discover with each spin.

In short, Dream rave seems to be everything that a fan could wish from Cloud Control's second album. The album delves deeper, without losing the lightness and playfulness that characterizes Cloud Control's music. Even when more dance oriented rhythms and sound scapes are used, the band doesn't lose its own identity. It's a dream(time) record.