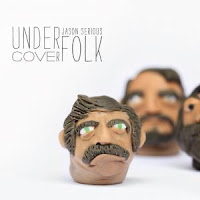 You can listen to 'Jessie's reel' here.

The Jason Serious Band comes from Munich in Germany and is comprised of an American singer and an Australian banjo player with a German rhythm section. The band tours behind its first record 'Undercover folk'. Up to this day I had never heard of this band, did not even know it existed and still it is possible to enjoy the music live. The front three, Alto on bass, Jason on acoustic guitar and Dave on banjo, kicked off the show in a three piece harmony and I knew in that one moment that this support act would not go wrong. And it didn't. (Joschi plays drums.)

The Jason Serious Band plays good old country music with a modern and a somewhat more traditional twist, but never keeled over into the sort of country that sends shivers up my spine for the wrong reasons. In a song when it came close to that happening, Jason led the band into this bridge that made everything o.k. Just plain beauty. There were more of these moments, especially during the three piece harmony singing.

The band shows that it has several folk and country styles under the belt. The Irish influenced 'Jessie's reel' was one of the highlights. Not in the least because of the very fluent electric bass solo. Ballads went really well, as well as more up tempo songs. The variation did its work very well, making the show fun to listen to with unexpected bends and curves.

Not that anything special happened. There are no virtuoso in this band, but The Jason Serious Band knows how to write a good song and play it well. My attention never wavered for a second, although my best guess is that I would never play a record often. Perhaps I'm wrong, but will not find out right now. If I can find it on Spotify and like it I will let you know.

If you like this sort of music and The Jason Serious Band is in town, you can't go wrong. Don't expect fireworks, but decent playing and good singing. There are evenings that I do not ask for much more.

You can order 'Under cover folk' here.