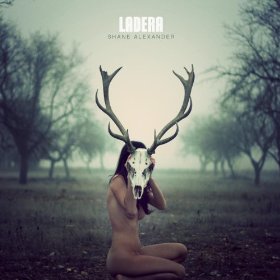 You can listen to a few songs here.

One of my favourite records of 2010 was 'Mono solo' by Shane Alexander. Several songs he wrote on 'Mono solo' were the best he'd ever written. In 2011 I did an interview with Shane for WoNo Magazine that was later published on the blog also (click here). In 2012 he released The Greater Good together with Dennis Koolen and Eugene Ruffalo (click here). At the trio's show last fall (click here) Shane showed me the cover photo of Ladera. And as you can now see it has turned out to be a beautiful cover, his best to date.

Shane Alexander and I musically go back to 2003 when he released his first full length album. On the cover of 'The middle way' you can see a lone man walking, guitar case in hand. This invoked the image in me of a lone, harsh singer-songwriter or a young Bob Dylan. I always thought that the image did not relate to the music on the record, which I liked, but did not yet think was special. This only changed with 'Mono solo'. And now Ladera his here, his fifth album. An album he funded through crowd sourcing.

In short, Ladera totally convinces. On his new album Shane Alexander continues the quality of 'Mono solo' and even takes it to new levels. Opening song 'One so young' rivals many a Simon & Garfunkel song and would not look bad in between the better The Beatles ballads. That the song at its finish goes off into psychedelic overtones, which are there in atmosphere not performance during the whole song, with Arab sounding guitar notes, does not matter. The tone for Ladera is set.

On Ladera Alexander gives his audience songs in a (near) solo setting as well as in a band setting. In the former we hear just his voice, his beautifully sounding, clean voice and his guitar playing singer-songwriter motives, in the latter he allows himself to rock in a dignified way or swoons in the slow rhythms of 'Far as I can tell'. This ballad is so beautiful. The screaming guitar, mixed to a soft level in one ear, a banjo going for it in the other, together with an organ give 'Far as I can tell' its own unique texture. A lot of attention went into details, as the sparse accompaniment in several songs shows. All in the right place and time. Just listen to 'Open your eyes' to know what I mean. 'Rainclouds of knowable things' is a great example of a song that is 100% Shane Alexander.

With Ladera Shane Alexander lifts along a little on the new psychedelic rage, but without leaving himself behind. In the end he has to play these songs on his own with just his guitar and perhaps a friend harmonising at times (like Dennis Koolen in The Netherlands). The psychedelica is not so much evident as it is this undercurrent on the record. An organ back in the mix, an ooh-aah chorus, not much more than that. What I also appreciate is the slow played banjo in a few songs. e.g. 'The enemy inside'. Of course this makes a song nudge towards a country setting and certainly so if a pedal steel is added as well. Again it does not make 'The enemy inside' an un-Shane Alexander song. To the contrary.

In the lyrics Shane Alexander in doing some soul searching. Reflectively taking stock of who he is and where he came from. Looking back at his life and family. In the final song 'Ladera' he's hiding from the ghost inside. Again, 'Ladera' is a great song, special.

With Ladera Shane Alexander has made a record that is different in small details from his previous ones. Ladera is more subtle. Instruments really stand out, giving each song its own signature. In this the growth of Shane Alexander's career shows through. He is more interesting to follow with each new record.

You can order Ladera here