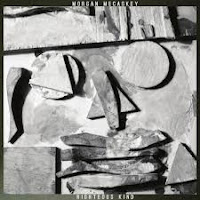 You can listen to 'Righteous kind' here.

Another one of these records that has come to me totally out of the blue and surprised me so much. This EP reminds me a lot of the EP Singaporean band Monster Cat threw on the world for free in 2012, 'Mannequins' (click here for the review). Majestic, full of sonic surprises and above all great songs. Righteous kind has it all. This is pop music in optima forma.

Morgan Mecaskey is from Cleveland, Ohio. From 2007 onwards she was a member of indie folk band Tinamou. Righteous kind was recorded in 2012 with Dave Douglas in Danger House. Recently she released a new song on her bandcamp website called 'Hinterland'. At this moment Righteous kind is still available on the Noisetrade website.

Righteous kind is a mini album with just six songs. It all kicks of with an instrumental, ultra short song called 'Jacque Cousteau' and is as tranquil as the Frechman's under water footage. The violins meander like an underwater current: slow and majestic. The bang that 'Two men' kicks in with comes as a bit of a startle. Okay, I'm awake! And quite righteously so, because beauty is thrown over me abundantly.

The first thing that comes to mind though, is that I'm confused. Morgan the name, the lady in the pictures. The voice sounds mostly male. I'm as confused as with 'One day (reckoning song)', but now the other way around. The internet tells me that Morgan Mecaskey is a lady and a pretty one as well. So, let's leave that behind us and focus on the music.

Righteous kind is not filled with easy going pop songs. Don't expect big hits. You can prepare for adventure and even some modern classical improvisations before the title song really starts. There's some Jonathan Jeremiah in the orchestrations, some Joe Jackson after his new wave period, like in 'Body and soul'. Morgan Mecaskey keeps it barer though. The mix in this song is broad, smearing the accompaniment and vocals out over the whole range of the mix. The explosion of guitars, strings and horns comes as a huge surprise and works fantastic. The going back to total emptiness does too.

'Separate' is another gem. The organ way back in the mix. The guitar notes cascading like a mountain brook descending the slope. Drops falling downs rocks and fern leaves. Sunshine shining through them creating prisms in the mist. Its like I can look through this song. It's mixed so transparent. I just love the electric piano in this song. In 'Separate' there is no doubt left that a woman is singing.

'Come the morrow' closes Righteous kind. This song comes closest to pure singer-songwriter. A girl and her guitar, some echo on her voice, laying down a beautiful track. Finger picking and hearing her fingers move over the steel strings. A bit sad, melancholy even. A song on the mysteries of life, about the way we humans deal with our lives and loyalties. A song in which Morgan Mecaskey lays her voice bare to the listener. Perhaps not all is sung perfectly, but with the right emotions. A perfect song to end Righteous kind.

Having listened to Righteous kind again and again there is not much room for other conclusions then a talent has risen. Righteous kind shows depth, adventure, beauty and perfection in song writing, playing and arranging. Not to forget the very good production as this album sounds fantastic as well. Morgan Mecaskey: a name to follow.

You can order Righteous kind here