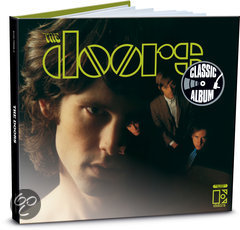 Just before leaving for the airport I read on Twitter that Ray Manzarek has passed away. Ray Manzarek was responsible for that fabulous and unique organ sound of sixties rock band The Doors. Of course The Doors is all about Jim Morrison, the legend, the icon, the tragically deceased member of the 27 club. Just look at the sleeve picture to the left. It says it all, even in 1966.

But where would Morrison have been without the unique sound created by Manzarek, the compositional skills of Robbie Krieger and the unique rhythms, for a rock band, supplied by John Densmore?

Ray Manzarek played his role of hippie to the very end. His image was being an uber hippie, with vague sentences spoken as if high all the time. Seeing Manzarek on tv the past years was slightly annoying. Come on, we've all come away from that Ray. But this seems to be who he was or wanted to be. So let me tell you my The Doors story.

I discovered the Veronica Top 40 in October 1968. Around this time 'Light my fire' became a small hit for the second time. I'm sure I remember it from then. Early 1969 'Touch me' became a hit and I remember my cousin, Tineke G. for WoNo Magazine readers, had 'Hello, I love you' on 7" single. I'm sure I've missed 'Love her madly' but remember 'Riders on the storm' and 'Mosquito'. That Jim Morrison died? I'm just not sure there. In those years The Doors remained a single band to me, somewhere in the background.

It wasn't until I was sitting with my cassette player connected to the radio, late '75 or early '76, that KRO dj Theo Stokkink played a lot of Doors songs during 'The story of The Doors' one hour radio show and I learned that there was more this band and most importantly that I truly, really liked these songs. That tape was played a lot. I still remember several songs that were on it: 'Break on through', 'People are strange', 'Texas radio', several singles of course.

It took a few more years before I had the money to buy the elpees. A world opened itself. My favorites were and are, 'The Doors', 'Strange ways' and 'L.A. woman'. Especially the last one is The Doors' true masterpiece. Everything seems to have come together while the band was falling apart.

Somewhere in the early 80s the band slowly moved to the background. Only to be revived with the Oliver Stone induced comeback of the band. Thanks to the movie 'Light my fire' became a small hit for the third time. Never a big one, although I can't imagine why. This classic has everything a hit takes: a signature intro, a great melody, memorable lyrics and the intro that is repeated. In 1991 I really started to listen to The Doors, learning to play the songs on guitar. Only later on my previous band played a lot of Doors songs after the addition of a keyboard player. Playing 'Love me two times', 'Love her madly' or 'Roadhouse blues' was so much fun.

Several years back I gave my son a Greatest hits album. It took him a few year though, but one day he told me: "Yes, this is a good album". Another fan gained.

In 2013 The Doors have again moved to the background of listening, but everytime I hear a song, I prick up my ears. At this moment I'm listening the debut elpee on Spotify in an hotel room far away from home. It has the same effect as always: Man, this is good. Here, just at this moment Ray Manzarek's signature intro kicks in. The very right timing to end this contribution. Rest in peace Mr. Manzarek and thank you for the outstanding music.