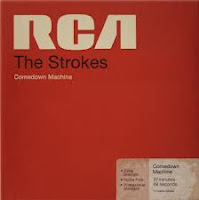 You can listen to '80s comedown machine' here.

WTF? The Strokes do Aha? ‘One way trigger’ may sound way cooler than ‘Take on me’, but WTF, The Strokes go 80s disco? Morten and his pals may be able to start a law suit, because the keyboard riff comes so dangerously close, that I would give it a try. The song scared the hell out off me while listening to Comedown machine for the first time and this album contains much more disco.

Having the first seven songs of ‘Is this it?’ in mind, the songs that I compare all else The Strokes songs to, that are classic The Strokes. Song eight is where the career of The Strokes started to nose dive. As far as I’m concerned. A few isolated good songs is what remains of a fine start, with ‘Angles’ at the deepest end. I could not find a single song I liked on that album. And how surprised I was that, yes, here it comes, I like Comedown machine as a whole. In large parts the latest effort of The Strokes is what a good rock album should be. Varied and rocking and rolling. For all else The Strokes have a sense of urgency again in important parts of Comedown machine.

‘80’s comedown machine’ is the song that shows the world how good The Strokes can be. It’s to the point, harsh, full of balled energy, punky, raw edged an above all singer Julian Casablancas sneers in his loudest voice, distortion on, leading his band to the edge. This is the naked essence of The Strokes. All else is irrelevant.

Life is good when it has pleasant surprises. 'Comedown machine' is such a surprise. The more I play it the more fun it becomes. I even start to appreciate the vibe of 'One way trigger'. On this album The Strokes has found a mix between its old self and what they want to be now in 2013 in a convincing way. The influence of Julian Casablancas seems very large, especially in songs like '50 50'. This beautiful little drop of a song has a distinct 60s flavour, but convinces totally, despite the fact that it has little to do with songs The Strokes are usually associated with. The mix of the relaxed voice and instruments with the driving muted guitar notes works quite well. The vulnerability Casablancas shows in '50 50' and 'Slow animals' is as convincing as his snarling old self in '80s comedown machine'.

Comedown machine is an album in which the guitar is not necessarily the main instrument. Keyboards are all over the place, in an 80s synthpop kind of way. With Julian Casablancas aiming to sing as high as the brothers Gibb in their second heyday. This took a little getting used to, but once that was behind me things changed. The main difference for me, I found, is that most songs on Comedown machine agree with me melodically, where most songs from song 8 on 'Is this it?' onwards did not. Simply to hooky, to devoid of beauty. Forced, if you ask me. There are enough moments in which Albert Hammond Jr and Nick Valensi are allowed to go all out on this new album or show themselves in creative ways and the rhythm section can really pound it out. This leads me to an important conclusion.

Comedown machine is The Strokes' best record since 'Is this it?' Twelve years down the line the band finally delivers its promise. That is a long time, too long to ever be relevant again and probably not everyone is as broad-minded as I am with Comedown machine. It is time to realise that The Strokes was not the band we hoped it'd be in 2001. So embrace what they are in 2013. A band that knows how to write and play some superb, but varied songs in a different format then we expected.

You can order Comedown machine here