Recently, David Bowie made a small comeback with a new album (click here for the review). I listened to most of the tracks but for me, he needn’t have done it. One of the most important aspects of his voice for me was its power.  I so often got sucked in; he seemed to have the power to make the listener feel like the song is about them. This new album was different, his voice had thickened, sounded vulnerable, light. People may like that, but for me it’s like it’s a different artist. So not for me.

My Bowie years were the seventies (or even 1969 for this one). Being a Science Fiction fan (also see my last contribution about Deodato), Space Oddity has always been one of my favorites. 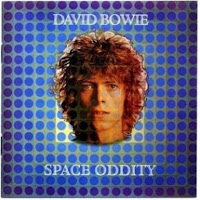 The moment major Tom get’s out of the spaceship always gets a cold shiver running down my spine. If only I were there…….

This is major Tom to ground control, I'm stepping through the door
And I'm floating in a most peculiar way
And the stars look very different today
Here am I sitting in a tin can far above the world
Planet Earth is blue and there's nothing I can do

If only I were there……

And I think my spaceship knows which way to go
Tell my wife I love her very much, she knows

And being up there, I would be so happy and proud to sing Space Oddity in honour of David Bowie.

Who? Chris Hadfield. He is a commander on board the International Space Station and recorded a revised version of David Bowie's Space Oddity. Revised because he wants his wife to know he will come back.
http://www.youtube.com/watch?feature=player_embedded&v=KaOC9danxNo#

If only I had been there to record it. Well done Chris Hadfield! 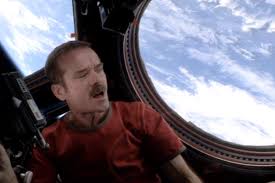 David Bowie's considerable legacy is on display now as part of the new exhibit "David Bowie Is" at the Victoria & Albert Museum of Art and Design in London.

You can listen to the original 'Space oddity' here.
Gepost door Wo. op 00:20