You can listen to 'Verliefd op een plaatje' here.

This is the fourth part of Bevrijdingspop 2013.

The Kik has been given ample attention on this blog in 2012. The album 'Springlevend' was reviewed in a positive way, as was the show of the band in Het Paard in late december. And again in May 2013, as you will see. 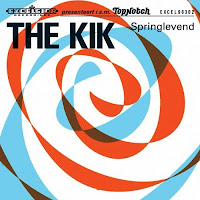 The Kik plays this very, very much fun beat music as bands played from circa 1963 till 1967. Clear melodies, distinct guitar parts, high sounding organs and vocal melodies galore. Beat with a little rock and roll and protest songs. The fact that The Kik sings in Dutch makes it even easier to sing along with in a very loud way. From the very first note I had this smile on my face that just refused to go away. The sun was shining and The Kik makes the sun shine in any kind of weather. A great combination it was on 5 May.

The set has not changed much since December, understandably. There was one song that I had not
heard before. The title song wasn't played this time, a pity, but the protestsong by Armand, 'Want er is niemand (en nou ik)' was played and appreciated. 'Straat Bali', which isn't on 'Springlevend', again made a huge impression. The lyrics were written by the grandfather of bass player Marcel Groenewegen, which suggest that the were written a while back. My dad having sailed on a ship called 'Straat Bali' a long time ago, makes the title somewhat special for me too. The rhythm of Bay City Rollers' 'Saturday night', introduces "the hit" 'Simone': "Handjes"! The tragic story of Willem Koopman, cyclist in the 60s, came by in 'Van wie hij was en wie hij is'. Protector of Rotterdam should the Romans come. And Toon Hermans' number one carnival hit 'Mien waar is mijn feestneus' of 1968 and 'De vogeltjesdans' were there to the surprise of many.

It all ended with what I consider The Kik's best song to date, the new single: 'Verliefd op een plaatje'. This song has all the energy, fun and quintessential 60s pop and beat feeling gathered within it. One of the best Dutch language songs ever, period! "This was rather good", said some guy next to me that was talking through the whole show, not paying attention to the rest of the set. The Kik's music is probably a stage too far for and too old sounding to a lot of people. The show proved however that there is room for The Kik in Dutch pop. Full of energy and great, if nostalgic, music.

Just one request, gentleman of The Kik. Should you consider a new cover to play, please make it 'Ik heb geen zin om op te staan' by Het. It will suit you like a glove and no one else plays it any more. Almost an obligation, says

You can order 'Springlevend' here