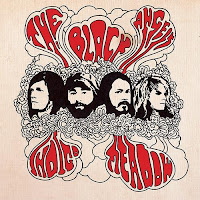 You can listen to 'Indigo meadow' here.

What is it with favourite bands' new albums that they often disappoint at first listen? This happened to me with Indigo meadow. A few weeks back The Black Angels gave fans the chance to stream the new album for a peek listen. I was so disappointed that I stopped at the third song. Luckily for me, I did not give up after that experience. It wasn't before the fourth listen though that my appreciation of the album really started to change.

Indigo meadow is slowly growing on me. Where 'Phosphene dream' caught me directly between the ears, it took the new album a bit longer. The change started with hearing 'Don't play with guns' again. This catchy song, also the first single of the album, settled into my brain, repeating itself over and over there. It has all these psychedelic fun parts and sounds. The high organ notes, the surf guitar lone notes and above all the fun melody. It made me give the rest of the songs a new chance.

From there all little details started to fall into place. The sound experiments and treatments. Of course most are totally anachronistic, daubed in purple psychedelic fluid projections, but most songs have these charming melodies, giving them that little extra that makes the songs stand out. The Black Angles have this over Jacco Gardner, who colours between the lines a little too much to my taste. The Black Angels do not. The band goes all out given half the chance, 'War on holiday'. Listening to Indigo meadow yet again I know exactly the difference. Jacco Gardner has smoked a joint once, but never inhaled, where The Black Angels show that, no matter how much fun mind expansion can be, there is a dangerous side to taking drugs. There are rough patches in the music, harsh lines, reminding us of the darker side of psychedelia. "The Peter Green/Syd Barrett effect".

'Love me forever' may start with a Roger McGuinn Rickenbacker guitar sound, the organ and rhythm make it part of this 1967 trip. The chorus shakes the listener awake from transcendental meditation into the here and now with a heavily treated guitar sound, after which even more fun things happen. The Black Angels clearly had several ideas for this song. Lucky for us they share them. If not all, at least a lot.

'Broken soldier' has this jump-like rhythm compared to the heavy 'War on holiday' that precedes it. 'Broken soldier may hold a message to modern day extremists. "Will you be the same when this is over?" No, is the answer. This may show either hope or despair, depending which view you take. There are too many "broken soldiers", and quite confused as I may add, in the last few years. That is for sure.

All in all Indigo meadow has less an effect on me than 'Phosphene dream' had. That is the fate of most records following the, in this case my, debut record of a band. Listening up closer Indigo meadow is a more than satisfying new album by The Black Angels. The variation in songs and the trippy addiction of songs like 'Always maybe' ensures my devoted attention.

You can order Indigo meadow here