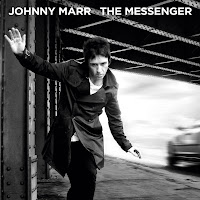 You can listen to 'The messenger' here.

Johnny Marr is, of course, THE Johnny Marr of 80s outfit The Smiths. The band I could never hear more than three songs in a row of before wanting to choke Morrissey. The whining, the feeling sorry for him self kind of voice. In the background all this guitar playing was going. All these notes played around the chords as if there was no tomorrow. 25 Years down the line Johnny Marr surprised me with his great fun, rocky, poppy album, with everything from New Order at its poppiest to Supergrass on board. Yes, surprised, as I almost left this album for what it was. An album by an artist from a band long ago that I never really liked. A few great singles accepted. (I'll admit that dancing to 'Panic' and 'Big mouth ..' was a joy.) Let's go into The messenger.

My first impression of The Messenger is that it is a versatile album. Mostly up beat with lots of detail to melody and an extra playful guitar part here and there. At the same I never had the idea that a singer "was missing" on the album. Johnny Marr is a singer in his own right. The music is set solidly into his formative years. The right mix between rock, pop and punk is found added with circa 1980 new wave, including The Edge like guitar playing. This results in a fun song like 'I want the heartbeat' in which it all comes together. Where many bands and singers in the 80s forgot that a good song also needs a strong melody, the reason why I'm no 80s fan in general, Johnny Marr embraced the best of both worlds on The Messenger.

The impressions after this showed me that my first impression was right. I started hearing more and more playful guitar lines, flying in and out of songs adding to the mix. The solid accompaniment that gives all the songs the right basis for Marr to excel in his playing. And that Marr is able to play with different moods. 'Say demesne' is this moody rock ballad, creating a lot of tension in the holding back way of playing, making it one of the best songs of the album. It reminds me a little of Simple Minds in its hey day, but the bombast is discarded, making it a better song than almost any song by the Glaswegians. When 'Say demesne' ends with a beautiful guitar solo, I was sold. Great song! Followed by some great riffing in 'Sun & moon'. Again showing the diversity of The messenger.

Music wise Marr may have released this album 20 years plus too late. On the other hand we are offered this music in 2013, which is as much of a surprise to me as it is pleasant. The way "free" is sung in 'European me' is so much fun, running extended over a few notes. Very well found. Just one example of the many hidden treasures on The messenger. The 80s organ in a rocker like 'Sun & moon' is another one. I'm sure that if you give The messenger a chance, you will find your own little treasures hidden inside the album.

AD 2013 Johnny Marr has become more of rock guitarist than a The Smiths one. His playing is more straightforward and in your face, while at the same time also more inventive, as a lot is going on at the same. The intro to 'Locked down' has all these guitar parts, including a 'Heroes' extended note and convinces all the way. 'Locked down' may not be the best song on The messenger and then that brilliant bridge comes by twice. Pure craftsmanship.

John Martin Maher may turn 50 later this year, he released a solo album, his first after all these years, that puts him on the map in his own right. With no one to hide behind he came up with the right songs and the right way to play them. For fans of The Smiths, New Order and all with a love for melodic guitar playing in songs that are a perfect mix of all that what makes rock music so much fun to listen to.


You can order The messenger here