You can listen to 'Different pulses' here.

This is part 2 of Bevrijdingspop 2013 in Haarlem.

One of the best read posts on this blog is an article I wrote last November on the hit 'One day (reckoning song)' by Asaf Avidan. I mused on the many question that surround the song. (You can read the blog post here.) Even before the show I was still trying to convince people in company that Asaf Avidan is a man, that 'One day' is sung by a man.

On stage three men and two women were getting ready for a show. Undoubtedly the band with the biggest hit in the world present on this festival, but also a band that most people present only knew one song of: the huge hit. The guy in the middle with the mohawk I supposed to be Avidan, which was correct. 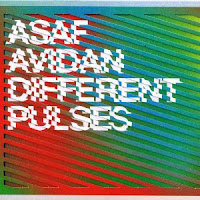 Nothing prepared me for this show. Avidan has this utterly unique voice, he even speaks this way, something between a tire squealing and a duck quacking. I knew that, so no surprise there. The way he uses the squeals, goes beyond the limits of his voice was as impressive as it was scary at times. Somewhere where Robert Plant in his younger days stopped, Avidan starts. I can't describe it in a better way. Avidan gave himself totally, giving the impression to go to the bone, not unlike Janis Joplin. At such moments he reminded me of images from the Woodstock movie, of James Brown in old black and white footage singing 'Please
please please', while these dark beats were played under the mostly very good songs.

The two ladies sang with Avidan, as did the co-guitarist/bass player. This extreme beauty underneath the beast. Sometimes reminding me of The Doors in the music, the way a song was built up and the organ sounds of course playing repetitive, mesmerising chords. For one songs the ladies went of stage, leaving the men to totally rock out. 'I'm going home by helicopter', I thought. The effects of stops and starts, Avidan going totally over the top in the stops. The band following his every move. A unit, flawless. It seemed a bit too much for most people present, but Avidan and co gave a rock show of the highest order.

'One day' came by, but it proved hard to sing along in a loud way. Harder than I thought. It is not a happy melody. For me he didn't need "the hit". Asaf Avidan had proven his point long before that. A great show by a very special artist in several ways. Best show of the day and with that we went home contentedly.

You can order 'Different pulses' here