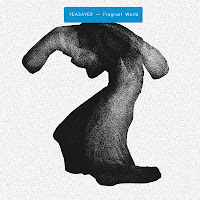 You can listen to 'Henrietta' here.

The title "Fragrant world" suggests to tickle the olfactory senses. Yeasayer can claim a lot but not that it tickled my nose. Everything to do with ears was tickled beyond mere pleasing though. This album is so chock full of surprises that I discover a new sound, a new mini melody, a rhythm beneath the rhythm every time I listen to the album. Fragrant world is an adventure. An adventure best to undergo on a couch with a headset on.

Yeasayer's first album 'All hour cymbals' (2007) more or less passed me by and later did not really impress me. 'Odd blood' (2010) I listened to a good deal more, but in the end it did not become a true favourite. My analysis is that is was to hard for me to recollect the songs easily and sing along with. Most bands of the new Brooklyn scene have that effect on me. 'Odd blood' was interesting enough though to give the band's third effort a fair chance.

The mix of pop, dancelike rhythms and experiment may no longer be as much to the taste of people at the vanguard of avant garde as a few years back, but to my pop reared ears Yeasayer has found a balance I very much can live with. The way a song like 'Blue paper' is built up holds the best of several worlds. The sometimes almost Beatlesesque singing melody is set off against a less immediate ear catching mix of electronic rhythm, synth soundscapes and weird noises. The combination works like a tight fit.

Low tempo dance songs dominate the album, but so do psychedelia, 80ties synths and 60ties singing. Yeasayer has sucked in all sorts of elements of the past 45 years in pop music and put it in its 2010s Brooklyn blender. The songs that roll out are nothing like easy digestible pop songs, as the band does not take the high road nor the easy road. It's more like the road through the dark forest and the moors. As listener you are never certain what's behind the next bend, tree or even the grass beneath your feet. You even run the risk of losing a boot to the sucking mud. Yeasayer presents something different in each song. The rhythm, the sounds, the singing, everything is allowed to change and develop what suits the idea or concept of the song best. In 'Devil and the deed' there's even Bee Gees like singing. Of course in a twisted, alternative way.

There is a negative side to Fragrant world. The album tends to  ripple towards the end slowly, not very dangerous. Perhaps too monotonous to my taste. This may explain why the album is received fairly moderately in the press. To me this is certainly the case when the influences of Howard Jones and Nik Kershaw shine through, without the Yeasayer sauce put over in an obvious way, like in 'Damaged goods'. I can't help to like the song though. Like 'Wouldn't it be good' was an exception to me in the 80ties. When I look at the bigger picture, the album falls to my good side, as within most songs enough is going on to make them interesting individually. And isn't that the way most people listen to music these days?, or so I'm told. (A strange idea for someone having been raised on albums, o.k. at first on just 45s.) 'No bones' makes up for "simplicity", but is too weird for my taste. 'Reagan's skeleton' has a great refrain, while the title is great. The line "Reagan's skeleton in the moonlight" made me prick up my ears.

To conclude my review. Fragrant world is an intriguing album, with a lot happening at the same time. At times weird, off centre, some exciting and fresh sounding. If you're looking for an album that sort of puddles on slowly in the back ground, pass this one by, but if you're in the mood for an audio trip in combination with several good songs, you should try Fragrant world out and play it (mildly) loud. Chances are you won't be disappointed, says

You can orden Fragrant world here