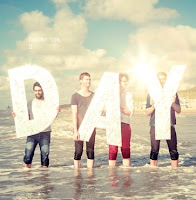 Only a few weeks after my discovery of Sunday Sun's first EP, I, II is available. I truly surprised me in a very pleasant way with a nice five piece selection of pop songs. Read more on I here. So where does II take me?

The first thing that sticks out like a shining sun is the harmonies. This band loves singing, but my bet is that they also like the math behind harmonies. Singing harmonies takes concentration, the ability to hear and "ignore" your singing partners at the same time. Simply hearing the options at hand helps. It is something else to look beyond the obvious harmonies. Sunday Sun appears to enter this intricate ballgame with pleasure. The delicate way that the band sings on 'Ready' shows that they work hard at their harmonies, with different melody lines topping one another. A joy to listen to.

The second impression is that II goes beyond the joyful pop songs and dives deeper musically and emotionally. This only means that there's more for the listener to get acquainted with. The Racoon-like 'You' is a quiet point on the EP. A very bare love song that is adorned with some horns. 'Take a left' is louder, but also a bit of a strange mix of different styles. Hard riffing, upbeat harmonies, an acoustic intermezzo and almost Earth, Wind and Fire like singing at the end. It's going off in very different directions and several times, like there are several songs put into one. At very end though the band had me where it wanted me to be, with 'Take a left' singing around within my head.

The third impression is that the band is able to come up with very different songs and handle several influences. Like when I reviewed I, it makes me wonder what the band wants to be, but at this stage I'm not complaining. The variety Sunday Sun offers is pleasant, the great singing holds the songs together as a unit and it is not as if the songs go from Abba to free jazz to thrash metal, is it? A band that does come to mind is Kaiser Chiefs, another band that likes enthusiastic singing. Again I'll mention The Beach Boys as Sunday Sun comes fairly close to 'Surf's up' with the intro of 'Ready'.

My fourth impression is that I am being taken on an adventure trip. Sunday Sun is exploring its influences, songwriting and arranging skills, while using it to come up with a gem like 'Now is now. The 'Sunday Sun train drove on up and I've hooked up my compartment to see where it will take me. It's not long before I will learn more about the adventure with the release of III in October.

II shows that Sunday Sun is a band that loves pop music and clearly strives towards writing and performing the perfect pop song. Give these guys a chance to convince you too. They offer II for free for a short time on their website. So take your chance here and check it out! (From 5 till 19 September 2012.)