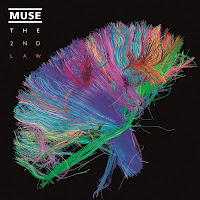 You can listen to 'Madness' here.

Muse was my last discovery of the 20th century, if we assume the 21st started on 1-1-2000. On a late Thursday evening or early Friday morning after band practice, watching an MTV show called 'Alter8' that played the video of 'Muscle museum'. On Friday I bought 'Showbiz' and played it an awful lot. The bombastic sound only grew and grew with each album, with 'Knights of Cydonia' as epitome to Muse's fury. Until 'Resistance' gave rise to the thought that Muse perhaps didn't know which way to go next. There was something missing, so I thought. With the release of The 2nd law coming up (I'm having a great pre-listen here at NRC. Till Thursday 27-9-12) my question was will Muse deliver again or fade as a band?

My first impression is that the band managed to reinvent itself. There is a good balance between the histrionics and the rest of the album. A song like 'Animals' has this under the skin kind of tension in it. Will it explode or not? As well as great rhythm and distorted guitar playing in a bluesy and jazzy style. In general the album gives the impression that Muse focussed more on the song than on the effect(s). 'Explorer' shows just how good a song Matthew Bellamy is able to write (and sing) and the band to perform. It's sheer beauty. But you also find an intro to which Doris Day could start singing.

With Muse Queen is never very far off. If there's one band allowed to wear the vacant crown, it's Muse. There is even a queen-like disco outing sang by bass player Chris Wolstenholme. 'Panic station' is a well dressed 'Another one bites the dust'. While in 'Big freeze' the choruses also come very close to Queen's 'A night at the opera'. Single 'Madness' is a strange mix of George Michael's 'Faith' and Queen's 'I want to break free'. Deep down 'Madness' is nothing but a blues in a 21st century's slightly tainted jacket. It doesn't hinder me for one second, as each is a good song in its own right. This new, slightly groovy direction suits Muse very well and adds a new sound to their palet.

The spacy solo in 'Animals' and 'Save me' makes me think of Pink Floyd instantly, but also off one of the songs on MONSTERCAT's first EP (2011) (read a review of this fabulous album here), but I suppose that's totally coincidental. This element shows that Muse dared to stick out it's neck and explore other influences and incorporate them into their sound. This makes the band a lot less predictable and more interesting. As Muse coupled this to great melodies, it looks like The 2nd law becomes a winner.

In interviews Matthew Bellamy explains the 2nd law, so I won't repeat it here. There's some vocoder treated science explanations in 'Unsustainable'. Perhaps here the musical experiment is taken a bit to far, but then the message is that we people at present take the modern life too far, which is unsustainable. Dance like beats and electronic treatment of sounds are prominent in the harder songs of the album. This gives them a distinct harsh edge and very modern sound.

All in all. Muse delivered on The 2nd law. The antics have been put aside, to some extend, while some great song are added to its repertoire. The over the top singing and playing have been replaced in most songs by subtle strings, melodies, a choir almost 'Atom heart mother' style and guitar or keyboards playing. A song like 'Isolated system' borders on the classical and trance at the same time and still works. Time will tell whether The 2nd law will stick, but my first impression is Muse scores big here. What a treat!

You can order The 2nd law here (soon)