The light the dead see. Soulsavers 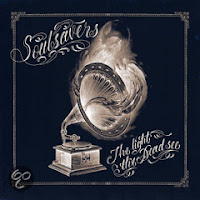 You can listen to 'The longest day' here.

What can one say in the face of beauty? After the last album by "electronica duo" Soulsavers, Rich Machin and Ian Glover, 'Broken', I think you could call me a fan. The 64.000 dollar question for me was whether the band appealed to me because of the leading role of Mark Lanegan on the album? The light the dead see gives the spotlight to Dave Gahan. Yes, of Depeche Mode. Something that usually sends me running. Yeah, yeah, the eighties had some great music, remember? Taken from his natural habitat Gahan sparkles. It's that simple. To take it one step further, in the epic song 'The longest day' Soulsavers appear as pretenders to the vacant Pink Floyd throne. And why not in a time when the Australian Pink Floyd show is starting to fill arenas?

The light the dead see attracts me and repulses me at the same time. The mix of Pink Floyd and the sweeter early progrock of The Moody Blues sometimes is simply to sweet and sticky for me to digest, while at almost the same time I hear the melodies and the deep set harmonies, almost gospel like, behind Gahan and can't get enough of it. This is the major difference with previous record 'Brave' on which Mark Lanegan's deep rasp sets off the light and the shade in Soulsavers' music in a much clearer way. Starting off with 'Death bells'. In this sense The light the dead see is much more one dimensional.

So what does one do in the face of beauty? Usually stare and adore, but after a while more pressing things take precedence over the staring. So it needs to be proven if beauty is true beauty or plain superficial. Like in real life. I haven't decided yet on this album to which the side the scale will tip. I really like the Pink Floyd like orchestration and singing of the album, but not all the songs. On the other side of the scale, I've played this album repeated times, because I wanted to produce a review. The album deserves this clearly.

Gahan exceeds himself in several songs. 'I can't stay' is a beautiful song in which he shows how well he can sing when the tempo is down. Unforced, holding the melody superbly. 'In the morning' and the already mentioned 'The longest day' are true winners. All in all the scale tips in the favorable direction for Soulsavers so far. Let's see where we stand in a few months from now, when the end of year list comes into view.


You can order The light the dead sea here