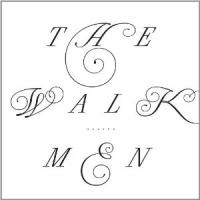 You can listen to 'Heaven' here.

The Walkmen are around for as long as this century and although I have its previous two recordings, the band just didn't stick with me. All this changes with the seventh album of the band. The clean sound and beautiful, quiet singing of Hamilton Leithauser struck an instant note with me.

The Walkmen is a five piece band with its origins in Washington DC, but since the start of the band the members reside in NYC. From there the world was conquered album by album. Heaven should be the album that lands the band in the album charts around the world. However, this is not an ABC. The band decided to offer fairly bare songs, several are stripped to the almost bare minimum as in 'Line by line'. Like Elbow without the pumped-up production. While other songs bring a combination of The Velvet Underground with The Strokes. Clear guitar notes grace 'Song for Leigh', which is an outstanding song by all accounts. When the organ kicks in, we are definitely in the sixties. The Walkmen have the pop side of Lou Reed down perfectly.

Producer Phil Ek, who worked with the likes of Build to Spill, The Shins and Fleet Foxes, created a clear sound in which the guitar, mostly high end sounding and the voice are the focal point of the album. There are some embellishments, but sparse and serving. The cover graces the music fittingly: bare but very graceful and a little odd. Ek makes The Walkmen sound like it is playing at somebody's home. Where all haste and stress is abandoned for the laziness of a Sunday afternoon. Even when the tempo goes up in 'The love you love', the singing and the leads leave a space and time, till the refrain is reached. Not that the music is not taken seriously. To the contrary. It clearly is. If anything, the album sounds warm, connected and reaches out to the listener to become involved.

As Heaven is speeding towards the final tracks I realise that I'm truly enjoying the album. There is a lot to discover and a richness in song writing and melody. Where I'm glad to find out that when a band plays slower, it doesn't have to be like Snow Patrol. Although 'No one ever sleeps' comes dangerously close. The dip of the record as far as I'm concerned. For me Heaven works. Maybe it's time that you tried a piece of it too?

You can order Heaven here