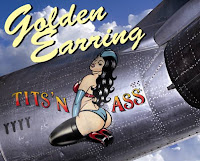 You can listen to 'Still got the keys to my first Cadillac' here.

Counting the days of teenage kids practising in their bedrooms, this band is around for 51 years. Scored its first hit in 1965. Plays in this line-up since 1970 (not counting additions that came and went). Entered the Dutch album charts on #1 in 2012. We are talking of a national institute here.

Every time I've visited the U.S. of A. since 1989 I heard one song of Dutch origin: 'Radar love'. Each time! (And four others some of time, 'Venus', Het kleine café aan de haven' ('The little pub at the harbour'), 'Una paloma blanca' and 'Twilight zone'.) 'Radar love' is one of the best rock hits ever. Oddly enough the band had many other major hits in The Netherlands and some even better than its staple song, but they never made it this big over the pond. I have always been a fan of their hits, hardly ever of their albums. 'Grab it for a second' being the big exception, with perhaps 'To the hilt'. This spring Golden Earring released its first new album in nine years to good critiques and I decided to give it a try. My first Earring album experience since the mid 80s.

There's only one thing to it and admit that "It's only rock and roll, but I like it". Golden Earring stays very close to home and does what it's good at. A tight rhythmic foundation provided by drummer Cesar Zuiderwijk and bass player Rinus Gerritsen, good singing by Barry Hay, who's voice is ageing fabulously and harmonising by George Kooijmans whose voice has some rough edges in 2012. There's some fierce slide guitar playing and soloing going on lending this album some great blues infusions Rory Gallagher style. I just love 'Cool as it gets'. T. Rex like riffing; Marc Bolan seems an influence on Tits 'n' ass. (O.k. a bit of a sorry title, but I'm ready to forgive the band.)

Another great addition is the playing of Jan Rooymans. His organ playing in several songs is plain beautiful. Apparently he's added to the (live) line up last year and plays on the album. So the Earring has a keyboard player again for the first time since 1976 when Robert Jan Stips, now in The Nits, played on 'Switch' (1975) 'To the hilt' (1976). A well deserved mention for the production by Chris Kimsey of Stones fame is in place. The sound on Tits 'n' ass is very clean while the instruments sound real raucous at the same time. If anything he got out the dirty side of Kooymans' guitar playing spot on. Most songs have a double guitar sound, which benifits the sound. The rock side of T&A is absolutely great.

Tits 'n' ass also has a ballad side. The best one is 'This love'. Starting off very small and half way pumped up to a power ballad. As a composition it comes close to 'Another 45 miles' or 'Going to the run'. The small slide eruptions and the slow played piano notes even give it a little extra. (The duck like singing in one section should have been replaced by another solution though.) 'Stratosphere' is another very powerful rocker. The older man's lament 'Wanted by women' ends the album. I was left behind in awe. People, Tits 'n' ass is the best Earring album since 'Grab it for a second'. Sounding very American and very, very Earring. If this wasn't 2012, I'd say this album should be the international breakthrough for the band.

Tits 'n' ass is a very inspiring sounding album. Grandpa's last trick? That's to be seen. There's no reason to assume that if Golden Earring is able to come up with a tight album like T&A in their 48th year as a recording band, they couldn't do so in the near future. Anyone liking classic rock, with some fierce bluesy accents ought to buy this album. Without doubt one of the best albums so far this year. It's as good, eh, cool as it gets in 2012.