Open your heart. The Men 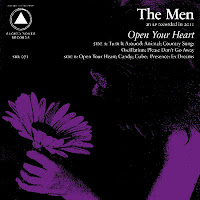 You can listen to 'Turn it around' here.

Open your heart if you react primarily on emotions or open your mind if you're more rationally inclined. Whichever of the two, The Men has produced a record that is like a roller-coaster ride in the dark. You never no where the next song is going to take you. The differences are so huge that sometimes it's a bit too much. There's one common denominator: it's loud. So all not fancying loud music can stop reading now. Should you by chance be half adventurous anyway, please proceed.

To take away any misunderstanding. We are talking about The Men like in the Brooklyn based band that is around since 2008 and has produced its third album since then. Following 'Immaculada' (2010) and 'Leave home' (2011) Open your heart shows that the band has taken on a fast pace here. It is said that this album is made to be more accessible than the previous efforts. That is to be seen, but then accessible to whom and compared to what? As I can't judge the previous outings, let's focus on Open your heart.

The album kicks off with two up-tempo punk songs.'Turn it around' is an aggressive song with contained energy, not overspilling it, so that there is a clear sight of the pop element of the melody. Not unlike Foo Fighters'  best songs. The soloing tips its hat to The Velvet Underground. 'Animal' offers some more of the same energy. The singing becomes more aggressive as in shouting. The Men set this off beautifully with the innocent sounding girl voice of Holly Overton, that lights the song up with a tremendous contrast. The guitars produce more and more noise in the background, making the song wilder, more primal. The band ends it with a Rottenesque snarl. If the next song had been like this, I would have known enough. But it's here that the album starts to change, sometimes beyond me, but it is artistic prowess The men show off.

'Country song' sets off with two guitars with a twang and reverb. After a while the band kicks in and even more guitars are added in this mid-tempo instrumental song that just goes around this simple sounding riff that is repeated and repeated. Next all hell breaks loose in a way that strongly reminds me of the Marble Sheep album 'For demolition of a spiritual framework'. Guitars sounding as if gravel settled in the speakers. A long song, nearly instrumental, slowly changing itself. I let myself be told that this is called post-rock. Whatever, it's quite o.k. to listen to. When the singer comes along, I'm strongly reminded of Sivert Høyem of Madrugada. Deep sounding and somewhat desperate.

Title song 'Open your heart' really appealed to me straight away. totally Buzzcocks like. I want to sing along to 'Have you ever fallen in love' and every time it's gone just before I can. With a great melody and guitars that vary melodies within the chord by adding or lifting a finger to the basic chord. Always fun. Then we go a little The Kinks in 'Candy', with a little country twist added in there in the acoustic and slide guitars. By then the band already packed me in. Despite the fact that the songs go this way and that, making Open your heart far from an easy album to listen to, it's this diversity that grabbed me. At times I'm challenged to work harder at liking them, at other times they tickle my fancy or sit just right with me. Well done, gentlemen! With more noise to come at the end, The Jesus & Mary Chain anyone?, of the album, the fun only gets bigger.

Let me end with a reference to the beautifully coloured cover. I just dig the purple.

You can order Open your heart here