One size fits all. Frank Zappa and the Mothers of Invention 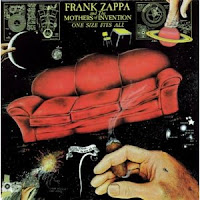 You can listen to 'Inca roads' here.

It was somewhere in 1979 that I got to know the music of Frank Zappa. Not through the radio or friends. He wasn't on the radio, none of my friends had a record. I was attracted by a sleeve. A sleeve so cool it had to contain a good record. And it did. Two in fact. 'Sheik yerbouti' landed well, but it was One size fits all that really grabbed me. It is my favourite Zappa record. Period.

I missed Zappa's last show in the Netherlands in 1988. Totally put off by a previous show of endless, mind-numbing guitar solos, I did not buy a ticket. At the 1988 show he played loads of One size fits all, with the whole gamut of horns and percussion with him. So I have to be sorry forever.

The album starts of with 'Inca roads' and a veritable road trip it is. On a lyric that must have been inspired by Erich von Däniken theories at the time of time travellers in the Andes, Zappa takes the Mothers by the hand in a multi-layered song, built from several events at different locations. The intro part is sung by George Duke with his slightly high, drawling voice, in which the vibraphone of Ruth Underwood plays a large role in driving the odd timed rhythm together with drummer Chester Thompson, while managing the impressive sounding breaks with apparent ease. Duke also gets to play with all sorts of modern synthesizers (for 1975) and sound morphing, before Zappa burst into one of his characteristic solos. When presented in modesty, they are very good to digest, as happens here. The solo is culled from a Finnish show and has nothing to do with the studio recording of the rest of the song. After the solo there's a mood change, a relaxing piece of music as if the band is floating off into space. The breaks kick in once more and then the end solos of the up tempo keyboard and vibraphone following each other note for (fast) note. After which Duke is allowed to take off. Jazzy, fast paced, tight, disorientating, a descend into the unknown for the space travellers before they land. Space travellers? Or "Chester's thang"? lands, on Ruth. "On Ruth? On Ruth! That's right, that's Ruth!" 'Inca roads' forever will be one of my favourite songs ever. Its adventurousness, frivolity and totally out there quality make it fun to listen to each and every time.

The album is full of surprises. 'Can't afford no shoes' is a straight rock and roll song with a Zappa twist. A good example of Zappa vocal multi tracking. Something like ten Zappas come out of your audio system and others added to the mix as well. 'Sofa no.1' is almost classical, with George Duke excelling on piano, and Ruth Underwood on vibraphone once more. It's the strange keyboard sound in the background that totally stands out as not rock and roll. Still, it's fits the song so well.

'Pyjama people' is a jazz rock outing with a long, but very rocking solo in Zappa's characteristic guitar tone. Zappa sings solo here and we can hear the moister in his mouth fizzle and crackle when he opens his mouth or moves his tongue. Extremely close miked, so nothing passes us by. 'Florentine Pogen' is a rock song, but with so many breaks and embellishments that one almost forgets that it rocks pretty hard for a Zappa song. Napoleon 'Murphy" Brock takes the lead here, showing another reason why Zappa became very vocal again on this album. He had too many good singers in his band to keep recording complex instrumental albums. Listen to the way the band harmonises a capella for a short part of 'San Ber'dino'. And then he added Johnny 'Guitar' Watson in two songs as well. (Mind, two years before his great come back hit single 'Real mother for ya'.) He gets to excel in 'Andy', a soulful rock song with loads of Zappa like bends and twists in which nothing is as it appears or is expected to be. The song sets off in all directions, surprises every few measures and gives the individual quality of his band mates a chance to flourish as well. San Ber'dino rocks hard too, with Captain Beefheart ("Bloodshot Rollin' Red") on harmonica and includes vocal jokes like 'I'm sorry, Bobby, that your head looks like a potato". There's a grand musical joke called 'Evelyn, a modified dog'. It all ends with 'Sofa, no. 2', where Zappa and George Duke show off their German proficiency over this beautiful melody we know by now as 'Sofa, no.1'.

The jokes on this album are still pretty subtle, where they would become a bit pubescent a few years later. From that moment on the jokes were more and more Zappa's political statements against the morals of American society. On One size fits all the jokes are subtle against his band mates, former studio engineers, and musical as anyone listening to the album will instantly recognise.One thing One size fits all shows overall, is the prowess of Zappa's musical universe. From experiment, rock and roll, soul and classical pop, everything is done to excel and stand out. Zappa managed to bend and twist his band into anything he wanted it to be and foremost, play. It's probably not for nothing that musicians only stayed with him for a short while. He squeezed them out like a lemon and left them at the bin of rock and roll obscurity. Some made a career for themselves or with others. The video of 'Inca roads', apart from all the clay antics, makes quite clear by whom the musical law was laid down in the Mothers of Invention. There's a composer cum director and musicians that follow him.


You can order One size fits all here