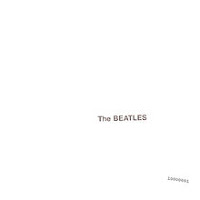 It's been awhile since Wo. wrote about albums from 1968 and 1969 based on Top 40 hit singles listings. 'Obladi Oblada' that entered the chart in January 1969 was one of those hits. The album behind it, The Beatles, does not qualify according to the rules he set at the start: hitsingle known, album unknown to him. The Beatles is in his possession since circa 1980. As Wo.'s the editor, he's writing anyway.

Nice cover, isn't it? There's simply nothing to see. "The White Album" indeed. The album who's inside pictures adorned the four doors of a hideous three layered cupboard that my parents sent me somewhere in the 80s for in my student home, 12 meters sq exactly. It got the nickname "The Beatles graveyard" from my dormmates.

The album will be 50 years old in one and a half year from now. Next year The Analogues will play it in full, so they announced this winter. It was preceded by my first fully conscious The Beatles single, which I still think is the band's best, 'Hey Jude' backed by that fantastic acerbic rock song called 'Revolution'. Somehow both songs sum up all The Beatles were. A pleasant, warm and comforting song turned into an anthem with just a few simple changes to the atmosphere and feel backed by a great rock song with passion and wildness.

I did not get to know the album until the late 70s or early 80s. Most likely sooner than later. The single that is the cause, the only single taken form The Beatles, of this post, was preceded by a cover by Marmelade in the fall of 1968. 'Obladi Oblada' was a minor hit for the band in NL. It made the top 10 but not much more. Compared to the number 1 hits around it, the single fared rather poorly. I can't really recall what my opinion was at the time. I do know what I think of it now. Something to do with barfing.

Looking with the knowledge I have now, it is not hard to conclude that The Beatles is more or less a continuation of 'Sgt. Pepper's ...'. 'Magical Mystery Tour' has more poppiness and depth, 'Abbey Road' is the final masterpiece. I always have The Beatles somewhere in between. The album has several great songs, but also its share of fillers and then there's that hideous experiment John Lennon should have kept for one of his solo albums, 'Revolution 9". (How are The Analogues going to do this live on stage? Not that I'm overly interested.)

This is the album of The Beatles' final four, not counting 'Magical Mystery Tour' and 'Yellow Submarine', that I tend to play the less. It is too much and in part too much of the same thing. I agree with critiques writing that one album would have been enough. After that simple conclusion comes another question much harder to solve: Which songs should go out? I found that, with one exception, I could not answer that question. Leaving only one other alternative as you will find. Let me take you down ...

The Beatles is the album that proves so well that the division Lennon - McCartney stands for rock vs blubbering songs is a bunch of crap. Just compare 'Julia' by John and move to opening song 'Back In The U.S.S.R.' by Paul. 'Back In The U.S.S.R', the song that proved to my dad that this band was a band of communists for once and for all, is a great rocking song, driven by the piano and a fiery guitar solo. The Beatles would not be The Beatles if they didn't give the song a twist in the "Ukraine girls" part. It's just one of those little things that make this band unique. And so good. Nothing is one dimensional as it would be with most bands.

With 'Dear Prudence' the influence of Indian music returns in a westernised way. Last hints of psychedelia are weaving their way into the song, while the rock side is just waiting to escape. No lighthearted background vocals here, but somewhat darkish and deep. Dark rock music is shimmering underneath the surface of this soft song. Mixed below the ballad top side. Another fine song.

Psychedelia is all around in 'Glass Onion' in which John looks back on several songs of the, then, recent past. The song is dark, rocking and far from happy. Lennon is not in the best of moods in this song. If this is a trip, it's a nasty one. He doesn't seem contented with what his band has achieved, despite tremendous output that is now seen as The Beatles' finest work. Did people view it differently early 1968?

And then the cause of the John - Paul division, exhibit #1 comes around. The problem is that I do hear how well this song is made, the many jokes that are in there. But it is and remains a dragon of a song, yet it somehow just puts a smile on my face. Nothing is one dimensional with this band. Not even that horrid single.

And so the album continues with some strange, short eruptions. Intentions towards a song left behind? Like 'Wild Honey Pie' and later 'Why Don't We Do It In The Road'. They're not songs, are they? Then there's the strange Spanish guitar intro to 'The Continuing Story Of Bungalow Bill'. The song itself is weird, weirder, weirdest and I like it. John just takes us on one of his musical adventures.

One of the highlights of the album is not by John nor Paul, but by George. This ought to have been George's first #1 hitsingle for The Beatles and a disgrace that it wasn't released as such. This song, with Eric Clapton on lead guitar, is so good. The downwards chord progression beautiful and creates the right mood for the song. Everything is exactly in its right place. Organ and piano doing the little extras, as the wobbly guitar is. George never sang a better song. Part of the greatness is thanks to Clapton, but his part would never have been there without the context laid down by The Beatles present at the sessions.

'Happiness Is A Warm Gun' is another rock song that is nothing like any other rock song. The tempo is weird, the rhythm changes all the time. With Ringo obliging. As a drummer he may be as underrated as Meg White was. Ringo delivered the whole time, no matter what the others came up with.

More ballads combined with some vaudeville in 'Martha, My Dear'. 'I'm So Tired' another drowsy ballad with a twist or two. 'Blackbird' is acoustic guitar mastery by Paul. 'Piggies' George's take on English traditional music. 'Rocky Raccoon' a country & western story on acoustic guitar, that finds the right tone. Ringo's first self-written song, 'Don't Pass Me By' is an integral part of The Beatles, which is a compliment in itself. It has a distinct feel that would become a signature for Ringo's solo songs. 'I Will' another of these Paul ballads that it is so hard to find at fault with, while at the same time I have a hard time warming to it. Another moment of the purest of beauty follows. John Lennon singing his heart out to a Julia, without doubt his mother. Just an acoustic guitar is all it takes and a beautiful melody. A good song doesn't need much more and The Beatles know it and do just that.
The mid section of the album is on the quiet side. It is about to come to an end.

It's time to rock out again. 'Birthday' is a kind of straightforward rock song with a fairly simple riff. Here it is the drum break and instrumental part that lead up to a totally different sequence in the song. Again the song is not as simple as most bands would have made the song. One idea was not enough, neither were two, nor three. They all go into the song. John takes over and 'Yer Blues' kicks in. Again a harsh song, that the average The Beatles fan may not have wanted to hear at the time. Me, I think it's one of the best songs on The Beatles. How suicidal did John feel?, might have been a good question at the time. "Even hate my rock and roll"?!, before the band takes a twist in the rhythm of the song from blues to rock (and roll). Stomp boxes had become available and The Beatles had some in the studio with them it appears.

Contemplation returns with 'Mother Nature's Son'. Again an acoustic guitar that leads the song onwards. That could have been enough, but an intricate arrangement joins the song embellishing it with horns. Again the simpleness in combination with cleverness that works a miracle.

Rock out again with 'Everybody's Got Something to Hide Except For Me And My Monkey'. Filler or brilliant? Objectively perhaps the first. It's a song in which West Coast rock finds its way into The Beatles music. Jorma Kaukonen's guitar sound is reflected into the lead guitar here. The cow bell gives it a propulsion forward that is almost unheard of. So yes, special alright.

All ears open. This is THE song on The Beatles. One of the best rock songs ever written "AAAAHHHH, poppoppoppoppoppop" go the harmonies. The lead guitar riff is a drop down from the slide. Paul is rocking so hard that it is not hard to declare this song the start of hard rock and all that came behind it. Yet it is so different from John's 'Revolution', the B-side. Paul is melodically the much stronger Beatle even when his song rocks harder than almost anything that came before, ever. The fade out and in and out is brilliant also. John's shout out at the end no doubt the truth.

George sets the equilibrium back in place with 'Long Long Long', another mystical song. Ringo's drumming is noteworthy as it comes in and makes the song come alive, leading up to the louder part, that makes the song whole and special. 'Honey Pie' starts vaudeville and remains this after it really starts. 'Savoy Shuffle' is George's loudest contribution to the album. Another fine song that shows that he has truly come into his own as a writer. Basically showing what the world could expect all through the 70s. The lead guitar in combination with the horns gives the song a soulful feel, without losing the rock element.

'Revolution 1' is the weaker version of the two song Revolutions. I prefer the numberless one on the flipside of 'Hey Jude' any day.

'Cry Baby Cry' is one of those songs of which there are too many on The Beatles. Fact is I could not say which one I could have missed. So would two albums have been better? Set apart I like the song with its halting-starting form making it come alive at the right moments.

Soft violins enter after the onslaught of 'Revolution 9'. Yes, I could have done without this one. The Beatles doing a 50s Hollywood movie theme. But o.k., it's The Beatles so I'll live with it.

Overlooking it all it is hard to conclude that The Beatles is not a good album. It holds tunes that most artists would have killed for to have as an original. So the only critique really is that it is too long. It contains too much information. For the rest, most of it is so good with a few songs of horse catégorie to boot.

Again I take of my hat to this band. There has been no better before or after. Count me, The Analogues, in 2018. But first that little something on the 1st of June .....