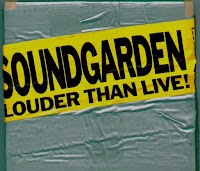 Some rock stars die too young. Chris Cornell is one of them. Despite the fact that his hey-day as front man of Soundgarden lay behind him for over 20 years, it is obvious that the respect his voice earned him, made sure the world had not forgotten him. A show of the reunion tour that brought Soundgarden to Europe, got reviewed twice on these pages in 2013 (see the links below).

For me Soundgarden is a thing of the past. Part of the grunge movement, but not my favourite band at the time. Nirvana simply is the best, Pearl Jam the best known and Alice In Chains so much sludgier. I'm happy with a few singles, with the dark, brooding 'Black Hole Sun' as my favourite.

By now it is clear to conclude that fronting a grunge band was not a healthy thing to do. Of the five major bands at the time, if we include Stone Temple Pilots, only one singer is still alive, Eddie Vedder. He'd better stop smoking straight away.

Cornell had played in Audioslave with the three remaining members of Rage Against the Machine, releasing three albums together, until RATM regrouped. Some solo albums followed, but it did not seem like Cornell really had focus nor an audience waiting for new music by him. I remained untouched by either his solo albums and Audioslave.

He had become a musician that depended on past achievements to reach his audience. People still loved to come and watch Soundgarden reunion shows, probably without wanting to hear too much new songs. A fairly sad state to be in. Perhaps this also was what it was and no great inspiration hit him any more.

The cause of his death is still unknown. Beyond that it was unexpected, there is no news. For fans no doubt the demise of Chris Cornell will have come as a great shock. I will just play 'Black Hole Sun' every once in a while and remember a great singer who sang songs that were not meant for me.

Let me end with referring you to the true fans.

Here are the two reviews. The first by /PV, the second by ReginA: