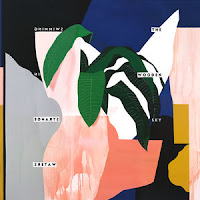 Two years ago The Wooden Sky popped up on these pages for the first time with its fine album 'Let's Be Ready'. Two years later the band returns here with Swimming In Strange Waters.

For those who need a short reminder. The Wooden Sky is a band from Canada, Toronto to be exact. The album title is a reworked quote from 'Dune' and appropriate for the sign of the times. 2017 seems to be becoming a somewhat normal year, although I'm nearly surprised by news each and every day. So in that sense we all are not only swimming in strange but let me add uncharted waters.

The Wooden Sky tries to give a voice to those times and does so mainly in a recognisable sound. That does not mean that Swimming In Strange Waters just copies 'Let's Be Ready'. Far from even. I remembered a more direct record and listening to it for the first time since a while, proved me correct. The Wooden Sky still has a form of Americana as its starting point, but now adds a fine, at times mysterious rocking sound. Somewhere between Bruce and The Gaslight Anthem. Nothing on Swimming In Strange Waters is this straightforward. Somehow things are allowed to float in the air, leaving room for subtleties. A lot is left to the listener's imagination to fill in. A mood to catch yourself.

That made this new album a surprise and more difficult. It took me a few spins to get used to it, where 'Let's Be Ready' was instantly likeable. Just listen how the title song opens the album. A darkness sweeps over the room, lifted when the light sounding guitar far in one corner of the mix joins the other instruments. Creating a contrast between the hard pounding drums, the harsh guitar and the lightness in the corner, added to by a equally high sounding organ. If something shines through abundantly it is the energy captured in the song. The Wooden Sky is on a roll here.

It is these two aspects that makes Swimming In Strange Waters the better album. Experiment and urgent energy. Here's a band holding nothing back from its listeners. It is happening now and that is what we have to understand. Just listen how 'Life Is Pain, Pain Is Beauty' rumbles on. Relentless.

When the tempo goes down, it is without seeking easy wins. 'You're Not Alone' presents us a firm drums, an organ and a staccato played violin. When we hit the solo section it is a soft sounding guitar and the violin who fill it in, while in the background some electronics do their thing. Pleasing effects remain behind for another time perhaps.

Over this all the gravelly voice of Gavin Gardener sounds like a strict master in class. Commanding listening just by presence. There's no need for using any force whatever. There's a hint of Van Morrison in his voice, but Gardener's is so much more smooth, so better to listen to. The vocal melodies flow more easily because of it.

Coming back to the demo's the band recorded before embarking on a world tour supporting 'Let's Be Ready', The Wooden Sky decided not to bring the songs to the studio but record them at home on analogue equipment. There's no way of comparing of course, but the decision seems wise. Listening to this album I'm under the impression that I'm hearing more who The Wooden Sky is. This is the bare essence without someone in the studio suggesting to do more of this or add that.

This body of work results in nine new songs ranging from the acoustic 'Born To Die', a truth like a cow, as we say over here, to some nice rocking songs in which nothing is taken over the top, creating that mysterious atmosphere I already wrote on. Ranging between roots, Americana, rock and mystery The Wooden Sky manages to find many a right balance.

The result is a strong mildly rocking song like 'Black Gold'. One part direct, one part haunting and leaving everything in between to me. While the floating melody of 'Riding On The Wind' gives just that impression of being taken here or there by the wind, like piece of paper or a leaf being played by the wind. The way the synth or the guitar through a Lesley speaker? swirls in the background gives exactly the right impression.

With Swimming In Strange Waters The Wooden Sky returns with a strong and imaginative album. An album which surprised me at first, but slowly but surely crept under my skin. It seems like it will be a while before it creeps back out. If ever.

You can listen to 'Swimming In Strange Waters' here: