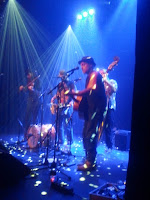 You have found The Hackensaw Boys on these pages from the very first months onwards right up to today. The band from Charlotsville, Virginia has been written on since 2004 in WoNo Magazine actually, from the first show I saw in Q-Bus Leiden.

It's been two year since I saw the band play last, three times in just over a week, so it was about time.

Things have changed. Now officially a trio, with Dutch musician and tour manager Thomas Olivier now full time on double bass duties as addition for this tour (and on record as well), the band is as concise as it has never been before. All the embellishments of banjo, mandolin, accordion, mouth harp and what not were shed. The band is left with just the charismo, fiddle and guitar. To be honest, I had expected to write about how I missed the banjo player of all banjo players, Jimmy Stelling, I did, but not to the extent I expected. 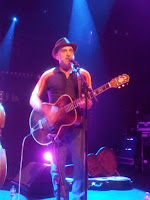 The Hackensaw Boys were a tight knitted outfit in Amstelveen. The songs were brought down to their essence with the fiddle the only instrument allowed to escape every once in a while, but serving the whole in the meantime, more clear than ever before. Now tight is the description fitting The Hackensaw Boys in all of the great shows by them that I was privileged to see. This was different, because no one can afford to have a lesser night now. String breaking, always a feature at a show, now is a small disaster as there is no option to fall out for a minute. And strings tend to break at The Hackensaw Boys shows. The relents pounding and pace of the songs are more than strings seem able to handle. There is so much energy in several of the songs, that I'm truly glad not playing in this band; my arm would fall off at the elbow before the end of the first song, were it not that my hand would fall off long before that incident could occur. 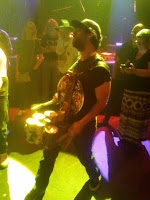 The nucleus of the show were songs from the band's latest and fine album, 'Charismo', reviewed on this blog last year. (Read here: http://wonomagazine.blogspot.nl/2016/04/charismo-hackensaw-boys.html) It shows what fine songwriters Ferd Moyse and David Sickmen are. Two completely different songwriters at that. The former delivers mostly fiddle songs, while the latter comes up with a whole range of songs, from sing-a-longs to contemplative, introspective ballads. Combined with a fine catalogue of songs from former albums, fun is guaranteed for all.

It all ended with three songs in the audience. I received my shot of 'Alabama Shamrock' and could go home happy once more. The band could always play like that as far as I'm concerned. The effect is even more direct. It does give some limitations admittedly. 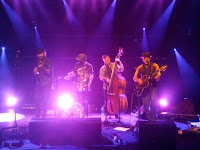 It seems the band will be back in October. New songs have been cut in Amsterdam over the past days, so a new album is on its way. Somehow I know it will be special again. For now I'll play 'Charismo' on the LP I brought home with me.

Now before The Hackensaw Boys another band was on stage. A band that made a lot of more noise, as it played electric. Giant Tiger Hooch is a Dutch band that plays rock and roll, rootsrock and 60s influenced garage rock with large helpings of electric blues. Fronted by a singer who indeed talked a lot and at least cost the band one song. This did not withhold the band to play its rough rocking songs to the maximum. The drummer played with a 1950s or 60s suitcase for a bass drum and somehow I have the idea that I've seen this before, but for the life of me can't remember where or when. 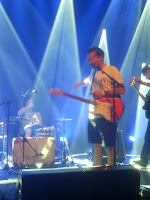 A few times I was reminded that someone like Wim Bieler or Wally Tax could have fronted this band. The rough side of The Outsiders and Q65 showed through several times. Giving Giant Tiger Hooch a Nederbiet feel in several of the songs.

Unfortunately my introduction to Giant Tiger Hooch will also be the final one as the band announced that they were on a farewell tour. Well I'm glad to have caught it while I still could. Supertight, If you're a fan of the likes George Thoroughgood, the rocking side of Los Lobos or an electrified John Leek Hooker, go and see this band before it is all over on 2 January 2018.