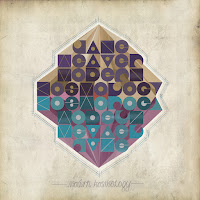 Jane Weaver is a new name to me, despite the fact that Modern Kosmology is her sixth album (bio) or ninth (Wikipedia), make your choice. That allows me to listen to her music with an unbiased ear, as apparently she is metamorphosing on her new album. What I'm hearing is a musical adventure with a lot of energy that takes me from Fischer-Z to The Velvet Underground and the right kind of 80s rockdisco.

Jane Weaver is from Cheshire in England and active since the 90s. First with the band Kill Laura and since 2002 as a solo artist. 15 Years later I'm introduced to an artist who is in her mid 40s and tapping into a lot of music that has come by in the past 50 years.

Don't expect any overjoyed exultations on Modern Kosmology. For that Weaver is perhaps too reserved, too British. Do expect a travel down many a high and by way of pop and rock music. With her light voice she's always in control of what is going on around her. And that is rather a lot. From pulsating rhythms to a firm folk ballad and a rocking song, Jane Weaver presents it to us in a secure and confident way. There's no doubt that here is an artist who stands by what she does.

Let's start at the beginning. 'H_A_K' starts with pulsating electronics, a slow vocal before a beat goes at it, the prolonged words drawn out. Until the two merge. 'Going Deaf For A Living' spooks through my head, exempting the modern electronics that did not exist at the time. 'H_A_K' shoots off the album like a sprinter at the Olympic Games and runs on like a TGV at full speed. The light and the dark contrast in the song is superb.

Again a beat plays a roll. 'Did You See Butterflies' has a beat that is kept up by a guitar strummed solidly assisted by drums and bass. Slightly psychedelic singing and keyboard playing, give the song an otherworldly quality. Something very mysterious is going on here.

That dreamy quality is something that describes Modern Kosmology as a whole. This is no dreampop, far from. For that too many dark parts are let into the music. No, it is in the singing of Jane Weaver. She seems to hover over whatever is going on musically. Almost ethereal, as if I could look straight through her had she been singing in my room. That combination works rather well.

She uses her voice in a more folklike tradition as well. Without becoming so eclectic as a Maddy Prior. This way of singing gives her voice a totally different sound, somewhat higher and more pronounced. 'Slow Motion' is a good example of this. The music is 80s poprock. A light synth over darker sounds sets the tone. Over the music this clearer voice is singing almost sounding happy "that we are lost".

How versatile this record is 'Loops In The Secret Society' shows. The intricate guitar interplay of Lou Reed and Sterling Morrison is all over the place, the underlying pumping rhythm and a light voiced, accentless Nico is singing. Only the screeching viola of John Cale is missing here. It's 50 years ago the banana record was released and it still inspires people to play songs like it. Now 'Loops In The Secret Society' is the odd song out on Modern Kosmology, but certainly one that stands out as the most direct song. How many guitars are woven into this song? Four? Five? There are little parts everywhere.

And out come the dance rhythms once more. In 'The Architect' Jane Weaver rocks out in a very 80s kind of way. It's the synths that rock again. Depeche Mode with a little OMD and China Crisis. Gary Newman with non-robot/staccato vocal delivery. Enough pop is let in to make the song sort of irresistible.

Modern Kosmology is an album that attests to explorations. More importantly Jane Weaver seems to have found what she was looking for. Resulting in a diverse yet strong album that mixes history with modern techniques in most attractive ways. An album worth exploring from the first to the very last note.

You can listen to and buy Modern Kosmology here: