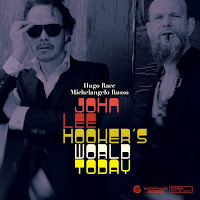 John Lee Hooker was born in 1917 and died at the age of 83 in 2001. He was one of those names of old blues men for me, basically until that album in the late 80s with a lot of the great stars of the time, 'The Healer', including two hitsingles with Carlos Santana and Bonnie Raitt. I found out that I didn't really like his sort of blues. Too one dimensional and, well, to be honest, boring. My standard in blues is Muddy Waters and nothing else compares it seems.

So when I found an album called John Lee Hooker's World Today on my digital doorstep I wasn't too curious to find out more. Of course I tried any way and found out about a mysterious sounding album that presents a modern type of blues that goes beyond anything John Lee was ever able to conjure up. Sit back, relax and be ready to get into a trance with Hugo Race & Michelangelo Russo's version of the blues as played in 2017.

The duo looks at the songs with the eyes, ears and options of 2017. The typical Hooker stomp is there. Under, over and right through it modern sounds are mixed that gives the songs something that it never had nor could have had at the time Hooker recorded. Recorded in something like 24 hours in Berlin, one continuous session, Race & Russo get into close contact with Nick Cave. My first connotation is with the opening song of Fink's blues album that passed through these pages circa a month and some back. Where Fink wrote original blues songs Race & Russo delve into John Lee Hooker's repertoire, including a cover of MC5 Hooker had done.

So it is not a surprise to me that the songs are monotonous. There's no other word for it. Hooker just loves a song in one chord, with short bursts of guitar notes. The rhythm often just his foot stompin' the rhythm. How the man ever wrote material for dozens of albums is beyond me.

World Today does not do anything to hide the elementary music Hooker made. What the album does show is what modern technology can add to the songs. A harmonica is smeared out, as if windswept, over the song. Electronic sounds and treated guitars have the same effect. Creating an atmosphere of desolation. Of U.S. trains honking before crossing unprotected crossings in the wrong side of far off places. There is no joy in this atmosphere. As if what is going on here is dead and not just a little.

Strangely enough I'm reminded of Dire Straits. That mysterious single, that turned out to be the band's greatest hit here in NL, 'Private Investigations'. Near non-music, all atmosphere. Where all music and joy was cut out of the song. Something like that is going on here as well. Except that was always the case with Hooker's music. Totally one dimensional. What was added was danger. John Lee Hooker managed to sound dangerous, perhaps was dangerous in his younger days. That was taken away because he lived to an old age and became something of a pop star in his 70s when he was brought back into the limelight and found a new generation of fans.

The man still has fans as Hugo Race & Michelangelo Russo show. I'm still not a fan of John Lee Hooker's music, but am certainly impressed by what is going on here. Dire Straits meets Nick Cave and John Lee Hooker. Many a day I had never expected to write down this combination, but here it is.

You can listen to 'Love Blues' here: