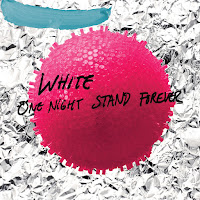 Is this a band or is this my record collection that fell over and got itself back up, but in a completely different order? This is a fair question, as so many familiar sounds and hints at familiar songs come by.

At best this simply means that White has produced a record that is extremely pleasant to listen to as the songs all fall onto extremely willing ears. At worst White can be dismissed as a bunch of copycats not worthwhile wasting my precious time on. I'm writing, am I not?

Yes, I am. For several reasons. One of them is to write how good De Staat has become. Listening to 'Private Lies' I know how far beyond White this Dutch band is, no matter how familiar the music sounds. But rest assured, that is not the only reason. One Night Stand Forever is a nice and well-made album. Several of the songs are great to listen to of their own volition. One Night Stand For Ever is nothing if not a party. Nearly each song could have made me dance between anywhere in the 80s right up to today. "It's unbelievable. Oh!" EMF is here alright, as is INXS, Duran Duran, ABC and many of those other former stars with blow-waved hair and colourful clothes, that I didn't need much beyond an occasional single for private party dancing from. White goes beyond that and that has everything to do with the mix of music by the better 00s bands like Kaiser Chiefs which can be found in here as well. I could go on with many more names but let's leave it for now.

Formed only in 2014 in Glasgow, White has already a few tours and festivals behind its belt before releasing its debut album. White is singer Leo Condie, guitarist Chris Potter, bass player Lewis Andrew and drummer Kirstin Lynn. Together they created something in the studio that is larger than life. Something they may have a hard time recreating live, unless the band comes with loads of energy. It seems it does.

There is a more serious side to White as well. A side that makes the band's music harder to resist. Once beyond the living musical pub quiz, it's easy to hear the love for the music that went in to the record and the keen ear for detail that went into the songs. An extra guitar lick, a familiar keyboard sound that slides in and out of a song, the harmonies added to the whole. White may know a ton of records and can play something from all of them, they know where to place the right part into their own songs.

The fun starts with the opening song 'Living Fiction', which I think even came by on the radio recently. Deservedly the song opens One Night Stand Forever. It's strong, varied and so 80s. After that White shows that it is far from afraid to use disco beats and guitars. "No-No-Notorious Notorious" meets INXS in 'Future Pleasures'. The fun goes up even more, when early 80s new wave enters the picture as well. Heaven 17 meets The Killers in 'Blush'. The fun thing is that White is not afraid to derail the song near total in the solo part and picking up where it left of before just as easily. If this was just a pastiche, like that U.S. band of the 00s with a name that keeps alluding me, White would never allow this in. (It's Scissor Sisters.)

The serious side shows in the ballad 'This Is Not A Love Song'. My good Belgian friends of The LVE would recognise themselves in parts of this song, I'm sure. The tempo goes back up soon afterwards. Billy Idol any one? Of course 'Be The Unknown' lends a little something from the atmosphere of 'Rebel Yell' and 'White Wedding'. The fun thing is that 'Be The Unknown' is a strong song by its own right. Better stolen well than badly made as the saying goes. The song has a great pace and drive. So no complaints here.

I could go on like this for the rest of the album, but I guess you've got the gist. However not before pointing you to the great alternative 80s disco of the title song. Heaven 17 all over again. Just click below.

There are a few misses on One Night Stand Forever. Something like three songs do not get me at all. Knowing my "love" for things 80s, that's far from a surprise. The surprise is that for a band that works the 80s so hugely into its music, so many songs connect with me so easily.

So, don't expect any originality on One Night Stand Forever. This band hops from love to love, doesn't it? Just one song and a love is ditched straight after recording it, to move to the next one and so White parties on forever. Let them make songs like this forever to. Everything missing in originality is made up for in power, songwriting skills and the sheer fun of it.

You can listen to 'One Night Stand Forever' here: