Gunther Brown? Now what kind of a name is that? Bernie Gunther o.k., for those familiar with the Philip Kerr character. Gunther Brown is a band from that other Portland, in Maine. Clamchowder territory, fishing on the rough coast of Maine. That sort of thing and a band playing roots music of a rather refined sort.

Thanks to Erwin Zijleman, our blog's expert in things roots, I had heard the name before and most likely took a listen on Spotify at the time. When I read the band had come over to this country for the first time and was playing in one of my favourite places to see bands, I knew where I was going this Sunday evening. Unfortunately for Gunther Brown only about 19 other people were so inclined. In a city of 110.000 + inhabitants and I'm not living there any more. The other 200 something that fit into the Q-Bus missed a fine show. 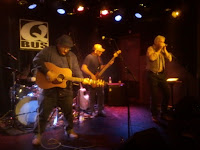 Five man on stage. The kind that could be your neighbour and in different age groups as well. Caps and hats in abundant supply. In the very first song, don't ask for songtitles as I did not know a single one before the show, things sounded so fine. The band rocked, the drummer incorporated a cowbell in an innovative way during his drumming. The bass player was one of those extremely solid ones, who in the meantime produces some fine melodies here and there and a lead guitarist who did not play one note beyond what a song takes. Of that notes every single one was the truth and nothing but the truth. The second acoustic guitarist from the second song onwards proved to be an harmonica player, spiking some songs and soothing others. On top of all that the singer laid his melodies with a fine sounding voice, with this rough edge, giving this sort of music the right kind of authenticity, joined in harmony by one or two others together or alternating singing duties. 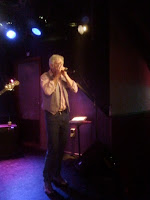 We heard country ballads, rocking songs, a square dance tune about Jesus and the devil and everything in between. The fun part or at times the surprising part were the intermezzos within some songs. One song even went into a Pink Floyd like progrock sequence, before returning once again to rootsy music. Other songs held stranger rhythm changes as an interlude. Playing with the audience just a little and test them. The cover of Neil Young's 'Old Man' showed where the love for this music all started for the members of Gunther Brown. The real surprise was, that 'Old Man' was familiar but not a lot better than most other songs. If there is a difference it lies in the licks on the lead guitar. 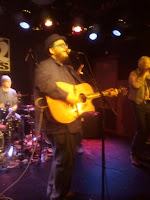 The evening was over before I knew it. 20 people in front of you must be a disappointment if you come from such a long way. On the other hand I had the impression that they won over 18 of that 20. The other two sat at the bar and left early. After the show I met singer-guitarist Pete and we discussed the world in 20 odd minutes. Times could be just this little less interesting, we both agreed on. Gunther Brown should not be though. No, I haven't heard anything new yesterday, but what I heard was played so well, with enthusiasm and the songs are so refreshingly good, that newness is totally beside the point. Gunther Brown is a great addition to my roots collection.

You can listen to 'Norridgewock' here: