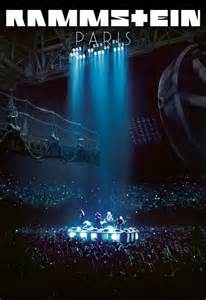 What  better to do to celebrate the 60th birthday of the Rome Treaty than to go and watch a movie in a Dutch theatre depicting the show of a German band playing a large venue in the capitol of France. Frenchmen singing in German. A German singer thanking the audience in French. That does sound like the right kind of celebration of the European Union, doesn't it?

Living in a larger town with a Pathe cinema has it advantages. It regularly shows these sort of movies for example. Not that I actively watch out for them, it is something I perhaps ought to do though. Watching a show like Rammstein's on a large screen is a treat in combination with a huge sound. We saw things better than most people present in Bercy.

Now I'm not a metal fan. Far from even. Yet Rammstein has found a place into my record collection ever since I got 'Mutter' in 2001. I noticed how the metal was interspersed with some great melodies and a frivolous keyboard that altered the whole spectrum of the guitar-drums havoc going on. The result is a whole range of songs being produced. From extreme metal to ballads and Rammstein style fairytales on music, but nearly always with those keyboards. This results in a lot of people responding favourably to Rammstein that have no liking at all for metal. I even heard people say that they heard 'Ohne Dich' being played at a funeral and at more than one at that.

The last Rammstein show I saw was the dvd shot in Nîmes in France. Over a decade lies between the two shows. I have to conclude that there no longer is any progression as far as the music of Rammstein is concerned. It is eight years since a new album was released and the fact that not a lot of the songs played were from that album is all telling. 'Mutter' and 'Reise Reise' are still the two albums on which the show focuses, just like at the Nîmes show. That leads me to conclude that Rammstein has slowly moved into the golden oldies circuit, albeit their own nostalgia, drawing 10.000s to a show. Rumour has it that there new songs have been recorded, but there's no conclusion on a release date.

If the band has progressed, it is in pyrotechnics. In fire, bombs, explosions and what not. Looking at what's going on it is short of a miracle that nobody gets hurt or worse. How long is it before someone dies at one of the shows?

Everything I saw was larger than life. From the way the band gets, finally, on stage, to what happens there. SM scenes on a small stage, guitars on fire, large and larger flame throwers and finally, for those with patience a ballad with an acoustic guitar played by bass player Oliver Riedel called 'Frühling In Paris'.

The music is simply fantastic. Rammstein is a machine. So tight, so mighty and at the same time so playful, mainly through the musical interventions of keyboardist Christian Lorenz. In front of it all stands the human giant Till Lindemann with his deep voice. Never in a hurry, in sharp contrast at times with all the hectic playing going on around him. The second distinction that makes Rammstein more unique. The debate whether Lindemann can "sing" is mute. He's perfect in this setting.

Teutonic to the bone Rammstein is a sort of anomaly in the international rock scene. A very unlikely candidate to play large venues outside of its home country. Yet the band is huge. The pyrotechnics is far from the only explanation. People show up for the songs. The rest is extra. A huge bonus, agreed, but the music is key and in that Rammstein has crafted its own niche. A space unique just for itself.

Rammstein in Paris is a fantastic movie, celebrating the band's greatness in all ways. Over the top and then some more. That is all true, but once I accept that, what I'm watching is a unique show with unique music. Worth every penny and every minute and even the time spent away from a sunny spring afternoon.