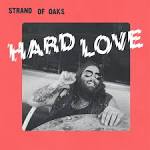 Strand Of Oaks is no stranger to these pages. The first album here, 'Pope Killdragon', was found for free on noisetrade.com. From there a trip through the development of Timothy Showalter was followed. 'Heal' was a transitional record it is safe to conclude in 2017. The album did not land completely well, with me, although it contained a great rock song in the best Neil Young tradition.

With Hard Love Strand Of Oaks takes the level of noise to another level. Folk is more and more deleted and rock let in. Some fine, loud rock riffs fly through my room. The volume knob and a few pedals are no longer a stranger to Timothy Showalter. With his music he queues up in a long line of artists who preceded him in this line of music. Starting somewhere in the 70s in the U.S., he mixes this rock with some Britpop enthusiasm to come up with a hybrid form of rock with that fine line of pop somewhere woven into the innards of his bombastic rock in which he even tries to outplay Dinosaur Sr. at his own game. The 70s in the end is what Hard Love is about. Just look at the cover. 70s electrified disco lettering and Showalter as Roy Wood in his Wizzard days. However, when all is said and done Strand of Oaks explodes in a way that is the signature of Admiral Freebee.

Add to this that the melodies of his songs work a miracle. Again that pop element presents itself. Nothing is small about Hard Love. It starts with the down to earth pounding on the drums. A lot of power goes into the hitting, where there seem to be no extras. Only the most elementary breaks come by, before the tempo is taken up again. Over this stack of noise the rest of the band plays. They all come in just as powerful to match the drums.

So when the power goes down, it is a surprise as well as welcome. 'Salt Brothers' is the fourth song on Hard Love and takes all the stress out of the album. Oh yes, it returns and vanishes totally again, but not without having scored some huge points.

Hard Love kicks off with the title track. The build-up is soft, slow and rather traditional. A little Fleetwood Mac, some Josh Rouse and Ryan Adams. When the beat comes in the music promises a more alternative rock, yet the mood remains with the names just mentioned. A nice starter, that threatens to go out of control, yet remains firmly within the pre-drawn lines.

The second song is something different. Strand of Oaks presents us with its most commercial intro to date. Aimed at college and alternative radio stations. The aptly titled 'Radio Kids' has a commercial edge to it. The verses are more edgy, before the chorus takes us off towards that intro again. The comfort of a song on the radio? Unfortunately something of nostalgia, I'm afraid. What is radio?, kids growing up may just wonder. Oh, that noise in the background my parents are producing, disturbing our streamed game or video?

As Hard Love progresses I find that I like the rock side of Strand of Oaks, but what adds to that pleasure is the light voice of Timothy Showalter. The two blend in a quite pleasant way, not unlike why I like Tim Claridge (and his band Jeff Goldbloom) so much. Both add a lightness to something tough. Showalter has the quality to come up with a nice riff or hook in the songs that make them just this little more interesting. Where Strand of Oaks may have lost some on originality, it gains again with the things it is able to add to the music which at such is far from ordinary and fits in a long line of music from over the past four, five decades. The fact that with Hard Love Strand of Oaks has found its own place here, is telling of its originality and playing strength.

Even when a song starts out, in my ears, as mediocre, it is little by little pumped up, seems to change and take on another personality. Not just because of the brute force, no, mainly because of the strength of the composition. 'On The Hill' will be a triumph live. An explosion of sounds and energy.

Another side of Strand of Oaks shows through in the piano ballad 'Cry'. Vulnerable, touching the song is. The sparse piano chords are only an excuse to sing about bursting out into tears. A guitar is added and some kind of noises as a cheering stadium in the distance, fazed by the wind. The conversation that follows seems totally out of place. 'Cry' is impressive. With a song like this, Strand of Oaks shows its versatility, the different ways it can excel in.

With Hard Love Strand of Oaks has nestled itself comfortably in the sub-top of (alternative) rock bands, with every reason to look optimistically upwards. When an album holds a fine rocking song like 'Rest Of It', a song that The Black Crowes were only able to dream of after its second album, it has my ears for a while. The fact that Hard Love holds so much more than just a fine rock song, says even more.

You can listen to 'Radio Kids' here: