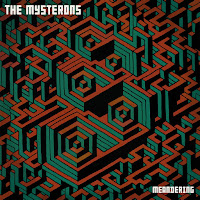 The Mysterons were one of the bands tipped by 'Oor' in its January issue in 2015 or 2016. In 2017 we have the album Meandering, released a few months back, but it remained on that stack of records, unreviewed. I decided to pull it out of there after all. The Mysterons is another band that wallows in 60s psychedelia injected with more modern sounds of synths.

Looking the band up on the Internet I ran into 'Captain Scarlet & the return of the Mysterons' and another band called The Mysterons. So a bit confusion for starters.

If anything, listening to Meandering I'm remembered by The Asteroid Galaxy Tour. The voice of singer Josephine Van Schaik has that same sort of helium infused quality. Most of the music takes a slightly less poppy turn than The Mysterons' Danish colleagues. It is more of a real band, although at times they do come together. Yes, the singing at times is at the edge of becoming irritating and each time that feeling is avoided by a twist or turn in the vocal melody or by interjecting a solo or break.

What I find I like about Meandering is the playfulness most of the songs have. Putting a little middle eastern melody into a song while the keyboard solo is totally spaced out is no problem for this band. Neither to make both convincing.

In the past few years many bands dipping their songwriting pens in the 60s fountain have found a way to this blog, including Dutch bands. There are a few similarities, perhaps the most with Pauw, but The Mysterons have carved out its own niche, by putting keyboards and electronic sounds up front, the drums second and guitars usually only in third position. That gives The Mysterons its own sound, while the most unique feature remains singer Josephine of course.

The music on Meandering has a distinct lightness. A floating quality is a part of the music presented. Again I point to the eastern influences that permeate the music without being the main feature. It is woven into the whole somehow, determining the mood of the record, without taking anything away from the pop/rock music Meandering presents. The drums keep the feet strongly on the ground though. Nothing's floating in the rhythm section. Just listen to the 'Baba O'Reilly' kind of sound in 'Binary Code'. Everything The Mysterons comes together in this song. It may well be my favourite on Meandering.

It took me a while before I singled the album out, but it never left the to do list. I just needed to become more familiar with it. By doing that I found that a lot of little musical pieces fell together in exactly the right places. A fun album Meandering is.

You can listen to 'Sold My Medicine' here: