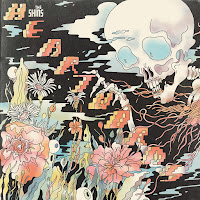 What a hideous cover! So, that's off my chest.

The Shins are back with a new album or actually James Mercer is as The Shins in the studio is now a project and not a band. After the somewhat disappointing 'Point Of Morrow' and the very pleasant second Broken Bells album, 'After The Disco', James Mercer is back with Heartworms. A title he apparently lent from a band called The Heartworms.

The music is as beautiful as the cover is hideous but also as playful as the cover is. If the music of The Shins is anything it is a lightness steeped in melancholy. Always in search of something that is either gone or beyond reach. 'The Unbearable Lightness Of Being'? It may just be James Mercer's favourite movie or book.

On Heartworms there is some room for experiment as you'll find. Electronic rhythms play a part in some of the songs. The mainstay is instantly recognisable as The Shins though. Melody, harmonies, seriousness mixed with the joy of singing and playing, that typical high voice. The further the album is under way the better I feel, finding my way in more and more. The level of joy listening to Heartworms grows by the song. Literally from so-so to brilliance. It takes me a few songs to get into the mood of the album. By the time I reach the last song, 'The Fear', I'm enraptured by the soft sound flowing from the speakers.

I find I'm playing Heartworms more and more. In fact I bought the vinyl version of the album this weekend. The warm sound spreads through the living regularly. At the same time I find something lacking as well. Somehow the music is devoid of emotions as if a machine has made this album based on algorithms. Is there something as too much perfection? It is not the sort of perfection that made stop listening to Bryan Ferry halfway through the 80s though. Heartworms is not a clinical album, for that it is far too lively. It isn't produced to death. So here's the paradox of Heartworms. Perhaps it is just too clever, too many great findings put into the songs. Not unlike the feeling I have with the past 1965 songs of The Beach Boys. More in awe than truly connected, that may be the most appropriate description of  my feelings toward this music.

As I already wrote, I'm playing the album a lot. It holds great songs, great melodies just like 'Chutes Too Narrow' and 'Wincing The Night Away' did. James Mercer is the kind of musician that always strives for the perfect popsong. The experimenting does not stop until that level is reached. For that he'll take all the sideways and byways to get there. I can only wonder how many version of 'Cherry Hearts' there have been. Versions when the verses were more than experimental rhythms, just like the choruses that did remain. Through how many changes did the rhythm of the song go before Mercer came up with all this? I'm sure I could write something similar for each song. So much is going on. So many melodies within melodies come forward, exotic sounds, rhythm changes and vocal melodies around the main melody. And somewhere, deep down there is this Carrabbean influence in the music, that has no place in this idiom of music and yet totally fits. A small surprise we receive as a warm little packet.

Heartworms takes its listener on an adventure. A musical adventure and on lyrical ones. 'Fantasy Island', may refer to the TV series of old, where we are almost taken to once again. Also James Mercer takes us on a journey following his youth travels as son of a military man. Like in the quite basic country song ' Mildenhall', where Mercer reports on a new friendship and how he discovered other, new music, The Jesus & Mary Chain' and playing music "and that's how, we get to where we are now". Such a "simple" song to explain the complex, melodic music The Shins has as a standard. Another little paradox on Heartworms.

When all is said and done, I love Heartworms. A great little rocker like 'Half A Million' is a delight to listen to. Again a million little and big ideas go into just one song. One of the songs where the distance between brilliance and feeling is covered by the way. This album simply comes extremely close to perfection and I'm tending towards declaring this The Shins' finest to date. And my little inhibitions towards Heartworms? Well, their mine and seem mostly covered up. So a 4,5* tending towards 5*.

You can listen to 'Name For You' here: