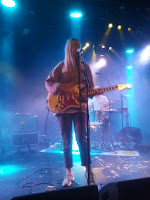 Two bands who's last albums I truly like on one bill. That was an offer I couldn't refuse. Both Amber Arcades and Moss have featured before on this blog in favourable ways. Although both can be stashed in the corner of alternative, indie rock, the differences are significant. Not only in music, but obviously also in experience and presence. Let's dive in, but not before some starting comments.

It is beyond discussion that I like both bands. Their recent albums 'Fading Lines' and 'Strike' are excellent. Both have found their way into my devices without too much effort. Amber Arcades may win out on points as I think its album is just this little more sympathetic. Both are musically beyond reproach with Moss being somewhat more experienced, which shows in the sound and the "tricks" to dress up the song some more. Now lets move on to the show. 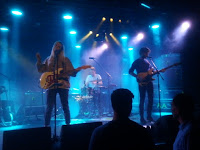 In English the position I have manoeuvred myself into voluntarily is that of a critic and I'm afraid that it is this role I have to play where Amber Arcades is concerned. There is no nice way to go about it. And it shouldn't as what I'm writing is well meant. Annelotte de Graaf's presentation leaves a lot to be desired and the fact that she is surrounded by hired hands clearly does not help her. To entertain is hard. It is hard work and takes effort. When all was sung and played I could not escape the feeling that she'd rather be anywhere else than on this stage and was glad to be able to leave it when the show was over. To communicate with the audience is a way to interact and win it over. So make sure that it can understand what you're saying. I had the impression that the interaction does not come completely naturally. That makes it doubly necessary for me to hear what is said to be able to sympathise. And finally the eye needs a little something as well. I'm not implying the Katy Perry, Rihanna kind of dress-up, but a little more stylish clothes would be welcome. It adds to the picture.

Musically there was a contrast as Annelotte de Graaf played her songs extremely confident. Her songs are her strength and it showed. There's no hesitation nor feeling uncomfortable on this front. The band played competently, but somewhat detached. Enough to make the songs come alive. If Amber Arcades is able to translate that inner musical strength into a little more outward podium presence, there's nothing to worry about. The songs are great and the new material that was played literally provided the show with an extra dimension. That new EP, announced for 2 June, is going to be something to look out for. Conclusion for now: the benefit of the doubt. A next time will have to be better. 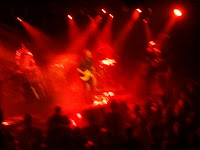 Moss took over the stage, putting everything in place itself and started to blast away. Here there was only confidence, several band members with a podium presence and songs that were taken far beyond the studio version, if so wished. 15 Years of experience showed easily. I think I could more or less point to my previous review of a Moss show, late 2014 if I'm correct, and take the easy way out.

Of course there were a lot of new songs, who held up great in the setlist. There was a lot of talking, this was a home show with lots of friends in the room and a lot of tuning the guitars. That never took anything away from the pace of the show, that knew an emotional moment when 'Strike' was announced. Guitar effects were all over the place and that 70s synth sound reminded me of everything between Tubeway Army and Fischer-Z. Oh, fine memories of my youth translated into great 2017 music. Because that it is. Nothing to be ashamed of where Dutch bands are concerned these days. It has never been this good and Moss is a proud member of that indie rock ship that ought to conquer the world like the V.O.C. once did. 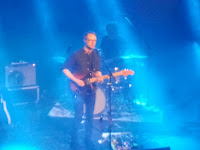 What Moss excels in, besides playing some great songs, is the use of dynamics. Within the show as a whole, but also within songs. Sonic storms can follow quiet moments and all played with extreme confidence. No holding back followed by extreme restraint. And then came 'She's Got A Secret'. The song to end all songs. Moss has not written a more powerful song that this one. With bleeding ears I left the Tolhuistuin, with a new vinyl and a new cd under my arm, receiving apps about 020 going to the semi-final. Congratulations, well-meant to, but you know what to do just about now!