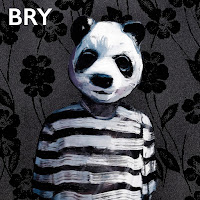 Since a few weeks Bry is spinning around in my cd player. The enthusiasm and positive energy oozing out of the speakers is simply too much to resist. The music of Bry makes the sun shine at those moments I need a little extra.

The album finally has its official release in The Netherlands. In Bry's homecountry Ireland, those interested were able to enjoy his music all through the fall and winter.

For me Bry, or Brian O'Reilly as he is known formally to the world, is a totally new name. For those who dwell on YouTube more than I do, he could be a household name. Bry was prone to travel around the world by the country. His goal is to perform in all countries and organised his trips and playing through social media, making an ever bigger name for himself. According to Wikipedia he is at 65 and rising. It seems the small time travelling days are sort of over. Recently he supported Twenty One Pilots at their latest European tour playing in large venues. The kind of stepping stone one needs to go on one's own headlining tour.

Back to the Bry, the album. Together with songwriter/producer Greg Wells, who worked with nearly all the great artists of the 00s and 10s, Bry has made a very clear sounding album. His guitar and voice are at the basis of what Wells built (and played) around him to bolster the songs and give them a more commercial feel. No matter the work of Wells, if the songs are no good, no bolstering will save them.

Right from the beginning 'Bry' captures me. 'Disarm' within seconds brought me into The Proclaimers territory, the Scottish twins with that infectious hit 'Letter From America'. The next thing coming to mind was The Decemberists. Colin Maloy seems to present here in the chorus. Bry knows how to capture the sound of The Decemberists and give it just this little extra in the form of a poppy element that is injected through the (synths playing at?) violins. 'Disarm' is the kind of song that grabs the listener by the ears and makes him pay attention.

With sympathetic ears I set myself comfortably for the rest of the album. Nearly all the songs on Bry have been given this little extra. Something that makes them stand out. A piano that enters the solid wall of music or another keyboard sound. With this wall that Greg built, Bry leaves his street and park playing days behind him. How he may have sounded can e.g. be heard in the intro of 'Your Life Over Mine'. Just an acoustic guitar and Bry's voice. After that Greg Wells takes over. There is no way that Bry can reproduce any of this on stage on his own. So there's an existential choice for him to make over who to be live. The singer-songwriter is mostly well-hidden away with an appearance at the right moment.

Bry is able to impress when things are kept small as well. 'Adventure Time' largely consists of voice, guitar and sparse piano chords. His charming Irish accent carries the song fully and successfully. The pleasant way Bry sings is a large part of the reason I like 'Bry'.

It's easy to try and compare Bry to the likes of Ed Sheeran, but as I already pointed out I'm reminded more of other acts. The Lumineers come to mind as well, but also a few boy bands. The sound in some songs moves dangerously close to their prefab sounds. Again it is the less polished voice, sounding so optimistically glad of being able to sing these songs, in combination with the more serious songs and an occasional rock outing that give 'Bry' the right mix to be digested fully, completely. Here I've given you the secret of 'Bry''s success. The album presents the best of a few worlds, making 'Bry' an album to brighten up your day in the appropriate moments and to be enjoyed on any other moment.

Something else ought to receive credit to. With the two pandas underway from China to the zoo in Rhenen the day I am writing this review, the cover of Bry's album could not be more appropriate. On its own it is a beautiful piece of art by Charming Baker, that Bry can be proud of to be able to sport on his record.

You can listen to 'Don't Go Alone' here: